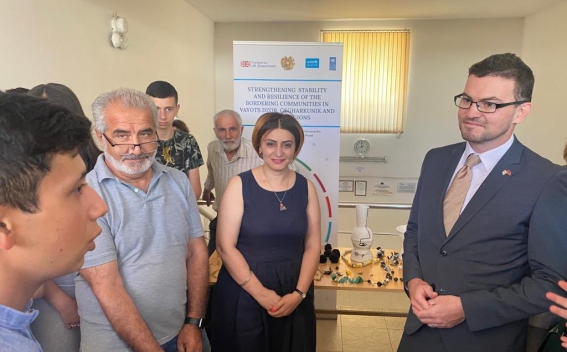 From 6 to 8 July, UK Ambassador to Armenia John Gallagher visited the Vayots Dzor and Syunik provinces of Armenia to observe the results of several UK Government funded projects, to meet local authorities to highlight the UK’s support to Armenia’s border regions, and to hear first-hand about the issues and challenges that the UK can potentially help to address, the British Embassy Yerevan said on social media.

During the visit, Ambassador Gallagher visited the towns of Goris, Kapan, Meghri, Vayk and Yeghegnadzor and nearby rural communities, met with the Governor of Syunik Robert Ghukasyan, the Governor of Vayots Dzor Ararat Grigoryan, and the Mayor of Goris Arush Arushanyan, as well as beneficiaries of projects supported by the UK Government. In these meetings the Ambassador discussed the UK’s continued support to the economic resilience and recovery of Armenia’s border regions.

In Vayk, Ambassador Gallagher met with staff of Vayots Dzor Regional State College who have attended training courses aimed at improving the quality of the online vocational education provided by the college. This initiative was supported by the UK’s Conflict, Stability and Security Fund (CSSF). The Ambassador also attended an exhibition of works by the participants of creative and business skills training courses provided to local youth.

The Ambassador also met with the participants of paid on-the-job training courses that aimed to reskill and upskill unemployed people in the region such as young women, displaced people, veterans and people with disabilities. This project contributed to an increase in the employability of vulnerable groups in the region.

On the second day of his southern tour, Ambassador Gallagher visited the Goris Women’s Development Support Centre to meet with parents and adolescents who have enhanced their skills to provide psycho-social support to their peers. He also visited a refurbished clinic in Karahunj.

The final day of the tour included a visit to Meghri’s international border crossing point to meet with the customs authorities to discuss the outcomes of the Customs Administration Development project funded by the UK’s Good Governance Fund. The project helped to modernize systems and enhance skills to provide more efficient clearance services for the goods crossing the border.

During his 3-day visit, Ambassador Gallagher also had an opportunity to see improved disaster risk preparations through demonstrations of evacuation exercises at a kindergarten in Vayk and at a secondary school in Khot, as well as through meeting with representatives of the NGO, Women’s Resource Centre of Meghri.

In tweets about his southern trip, the Ambassador expressed his pleasure at visiting the region and the important work supported by the UK that will benefit the people of Armenia. ''I will definitely be back!'' he declared.