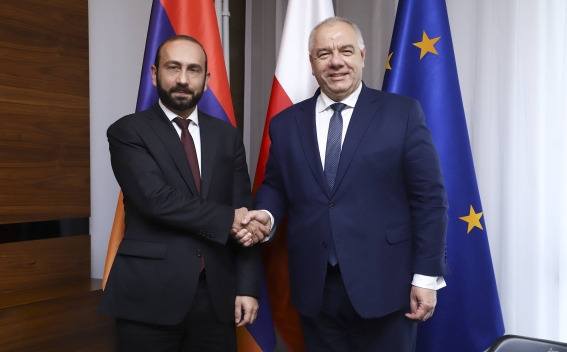 On July 19, Foreign Minister of Armenia Ararat Mirzoyan, who is in Poland on an official visit, had a meeting with the Deputy Prime Minister of the country Jacek Sasin.

The interlocutors commended the development and existing dynamic of the interstate relations for 30 years since the establishment of the diplomatic relations.

Foreign Minister of Armenia underscored that Poland is one of the important European partners of Armenia.

Ararat Mirzoyan and Jacek Sasin discussed the prospects for the development of economic cooperation between the two countries, expressing readiness to make efforts towards the full realization of trade and economic potential, creation of investment opportunities and activation of business to business contacts.

Minister Mirzoyan noted that since 2018, the anti-corruption campaign, as well as reforms towards improving the business environment, have been widely implemented in Armenia, which creates good opportunities for the investors.

The sides emphasized the implementation of the agreement on the acquisition of about 65 percent of the shares of the Armenian Stock Exchange by the Warsaw Stock Exchange, which will create new opportunities for cooperation in the capital market between Armenia and Poland.

The role of the Armenian-Polish Intergovernmental Commission of Economic Cooperation as an effective platform for discussing joint programs and outlining practical steps was highlighted. In this context, the interlocutors also emphasized mutual visits of business delegations and the holding of conferences.

At the meeting, Foreign Minister Mirzoyan also presented the position of the Armenian side regarding the peaceful resolution of the Nagorno-Karabakh conflict and the normalization of relations between Armenia and Azerbaijan.