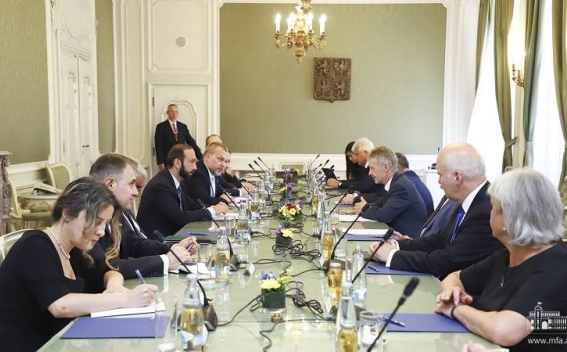 On July 26, Foreign Minister of Armenia Ararat Mirzoyan, who is in Prague on a working visit, had a meeting with President of the Senate of Czechia Miloš Vystrčil.

The interlocutors referred to the development of the Armenian-Czech interstate relations, emphasizing in this regard the continuous strengthening of cooperation in the parliamentary format. The recent activation of high-level inter-parliamentary mutual visits has been commended as an important indicator of the bilateral willingness to consistently deepen the existing rich dialogue.

Ararat Mirzoyan presented the agenda of reforms consistently implemented by the Government of Armenia, which are aimed at strengthening democratic institutions in the country, protecting human rights, strengthening the rule of law, and fighting against corruption.

The sides referred to the strengthening of the Armenia-EU relations and cooperation within the framework of the Eastern Partnership.

The situation in the South Caucasus was also discussed during the meeting. Ararat Mirzoyan presented the efforts made by Armenia for the establishment of stability and security in the region, emphasizing that the realities created as a result of the use of force cannot create a stable basis for peace.

Referring to the humanitarian issues resulting from 44-day war, the Foreign Minister stressed the need for the urgent repatriation of Armenian POWs and civilians illegally detained in Azerbaijan, the preservation of Armenian monuments  in the territories fallen under Azerbaijani control that are part of universal heritage, as well as the need to prevent the consistent cases of vandalism. In the context of humanitarian issues, the Czech side emphasized that the provisions of international law and the Geneva Conventions must be adhered to.