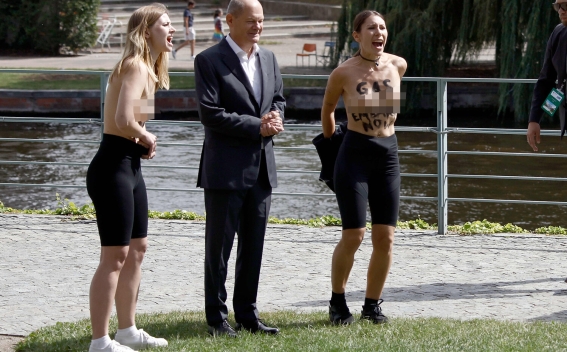 Two girls staged a protest at a photo shoot with German Chancellor Olaf Scholz, baring their breasts in front of him. This is reported by the German newspaper Bild (blocked on the territory of the Russian Federation).

According to the publication, when Scholz held a photo shoot with two girls, they suddenly tore off their T-shirts and exposed their chests. ''The inscription in English was clearly read on the torsos:'' Gas embargo now! ''(Gas embargo now),'' the newspaper clarifies. The guards eventually reacted quickly and took the girls away, but Scholz himself looked confused.

The photo shoot with the German Chancellor was held as part of the Open Doors Day on the territory of his office in Berlin. As a result, anyone could attend the event that day and even take a picture with the head of the country.

Earlier, the Germans rebelled against Scholz because of his sanctions against Russia. Activists booed the politician during his speech in Neuruppin. Also, the inhabitants of the country shouted to him – ''traitor''.