European Countries Will ‘Pay a Price’ This Winter For Ukraine Support: NATO Chief 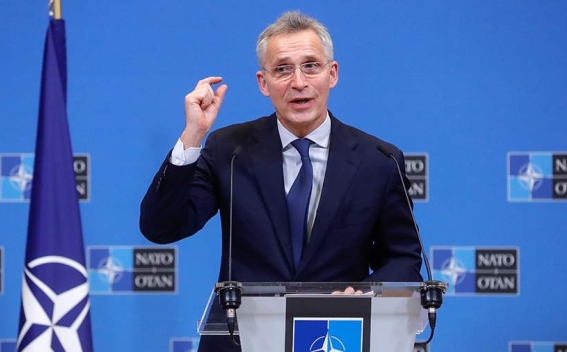 NATO Secretary General Jens Stoltenberg penned an op-ed that was published in the Financial Times on Wednesday insisting that although Europeans will face rising energy costs this winter after levying sanctions against Russia, the continent has a “moral responsibility” to support Ukraine.

''The war in Ukraine is entering a critical phase. Winter is coming and it will be hard. Hard for the Ukrainian people and armed forces who are fighting for their freedom, and hard for those of us who support them. Our unity and solidarity will be seriously tested, as families and businesses feel the crunch of soaring energy prices and costs of living caused by Russia’s brutal invasion.

We face a difficult six months, with the threat of energy cuts, disruptions and perhaps even civil unrest. But we must stay the course and stand up to tyranny — for Ukraine’s sake and for ours. We do pay a price for our support to Ukraine. But the price we pay is counted in dollars, euros and pounds, while Ukrainians are paying with their lives. And all of us will pay a much higher price if Russia and other authoritarian regimes believe they can invade their neighbours and trample on international law with impunity.

The price we pay in supporting Ukraine also benefits our own security. Vladimir Putin has clearly stated that he wants to wipe the country from the map and rewrite the European security order. Russia is temporarily occupying about 20 per cent of Ukraine - four times the size of Belgium, or half of the UK. Emboldened by any success, Russia could risk further aggression against other neighbours, and even an attack on Nato allies. So we have a choice to make about the world we want to live in. Nato allies are committed to each nation’s right to choose its own destiny. That is why we are providing unprecedented financial, humanitarian and military assistance to help Ukraine prevail as a sovereign independent nation.

Since Russia’s illegal annexation of Crimea in 2014, allied countries have provided billions of dollars of support for Ukraine’s security sector and institutions, and trained tens of thousands of troops, including special forces. This helped to make the Ukrainian armed forces stronger, better led and better prepared for Russia’s renewed invasion. Since February, allies have rallied to Ukraine’s side with unprecedented military, humanitarian and financial support. In June, Nato leaders agreed a strengthened package of assistance, with fuel, food, medical supplies, military gear, secure communications and equipment to counter mines and drones. We are preparing more than a dozen new projects to help Ukraine face the winter. And we will continue to help the country strengthen its defence and security sector for the longer term, and transition from Soviet-era weapons to Nato-standard capabilities.

Nato is part of the US-led Ukraine Defense Contact Group, which I will join again this week, with the intention of sending a clear message that we must continue to step up the assistance that Ukraine needs. We see the decisive difference our support is making on the battlefield every day. The Ukrainian army has proved its ability to resist Russian aggression, strike back deep behind enemy lines and impose significant costs on the invading forces. The massive sanctions Nato allies imposed, together with the EU, are also having an impact on the Russian economy. They will only bite harder as time goes on, given the departure of talent and capital, and the travel bans and asset freezes on Russia’s elites. The Kremlin has cut itself off from its closest and most lucrative oil and gas markets in Europe. Above all, technology sanctions are severely limiting Russia’s access to the advanced semiconductors and chips it needs to power its automotive industry, aircraft and war effort. Our nations are seizing this opportunity to diversify our economies and energy supplies, strengthen our resilience and break free of Russia’s energy blackmail for good. At the same time, we are making the most fundamental shift in Nato’s deterrence and defence since the cold war, significantly enhancing our presence on the eastern flank, putting hundreds of thousands of troops on higher readiness and continuing to invest in cutting-edge capabilities. Nato’s security guarantees leave no room for miscalculation in Moscow about our ability to defend every inch of alliance territory. At the same time, they enable allies to support Ukraine’s right to self-defence. There are tough times ahead, but we have faced tough times together before. The cost of not standing up for our values is always greater. For Ukraine’s future and for ours, we must prepare for the winter war and stay the course''.