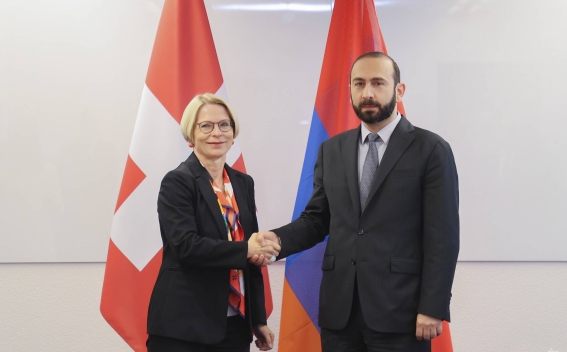 On October 3, Foreign Minister of Armenia Ararat Mirzoyan held a meeting with State Secretary of the Federal Department of Foreign Affairs Livia Leu in Geneva.

Ararat Mirzoyan briefed his colleague the situation resulting from Azerbaijan's recent large-scale aggression against the sovereign territory of Armenia, specifically emphasizing the inadmissibility of the policy adopted by Azerbaijan to achieve its own maximalist aspirations with the use of force and threat of use of force.

The interlocutors also touched upon a number of issues of bilateral and multilateral agenda of Armenia and Switzerland. Minister Mirzoyan noted that the Armenian side is interested in the Swiss experience of recovering assets of illegal origin.

Ararat Mirzoyan and Livia Leu exchanged views on regional developments. Minister Mirzoyan expressed his gratitude for hosting the meeting with the Foreign Minister of Azerbaijan yesterday and presented the unfolded discussions.