There is an opinion on creating Nagorno Karabakh-Azerbaijan international dialogue mechanism: Armenian FM 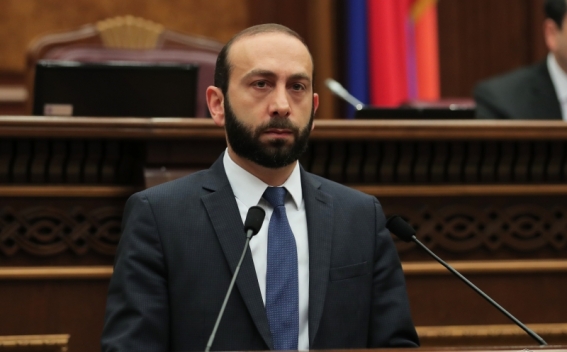 Foreign Minister of Armenia Ararat Mirzoyan said that Azerbaijan handed over to the Armenian side the elements of the peace treaty between Armenia and Azerbaijan based on the previously presented five principles, Armenpress reports.

During a Q&A session in the Parliament, one of the lawmakers said that after the Geneva meeting with the Azerbaijani foreign minister, the Azerbaijani side issued a statement according to which the elements of the peace treaty between Armenia and Azerbaijan have been handed over to the Armenian side based on the previously transferred five principles. When asked what these elements are and whether there is any progress in this respect, the FM said: “You are right, there has been such a statement and indeed such a document has been handed over to us. You know that that famous five principles which were presented by Azerbaijan in mid-March have been published, and in fact, both our public and the international community are well aware of that principles, and we have stated publicly that there is nothing unacceptable for us. The proposals presented by Azerbaijan this time, in fact, are built based on that principles. Of course, there are some things which we analyze and will still respond. There will be things that again will be acceptable for us, and there will be things that will not be acceptable for us. There will be proposals from us which we will propose to include. In other words, a normal negotiation process will continue”.

The MP also recalled the statement of the Armenian Foreign Ministry regarding the creation of a discussion mechanism between Stepanakert and Baku. Asked whether Azerbaijan has a position on this matter or not, the FM said: “I have to refer again to the story related to that five points. If you remember, we said that time that there is nothing unacceptable in that five points, but they do not reflect the whole agenda. And we shared our visions, and most of the visions related to Nagorno Karabakh and the addressing of this issue is also a part of the negotiations now. Now there is an opinion on creating Baku-Stepanakert or Nagorno Karabakh-Azerbaijan international dialogue mechanism. Discussions are underway in this respect. Of course, we have a position, and Azerbaijan has another. When we come to any mutually acceptable position, opinion or mechanism, we will definitely inform”, the Armenian FM said.