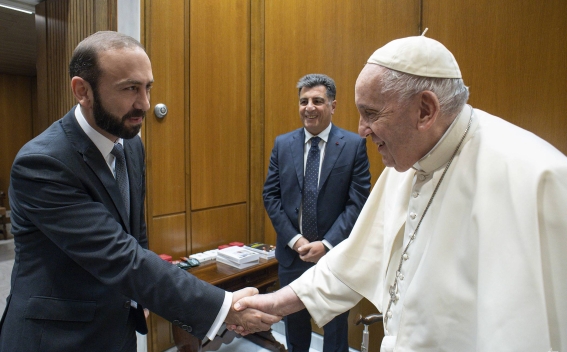 Expressing gratitude for the opportunity to meet, Foreign Minister Ararat Mirzoyan conveyed the warm greetings of the Armenian people and Government to His Holiness. The Minister noted that his visit to the Vatican takes place in the year marking the 30th anniversary of the establishment of diplomatic relations between Armenia and the Holy See, and it is a good opportunity to discuss bilateral relations based on centuries-old historical ties and similar spiritual values.

Foreign Minister of Armenia expressed his gratitude for numerous messages and calls for peace delivered by the Pope during the 44-day war and the subsequent period.

Minister Mirzoyan briefed His Holiness the situation unfolded in the region, highlighting the importance of addressing humanitarian issues, and in this regard conveyed the message of the Prime Minister of Armenia to the Pope.