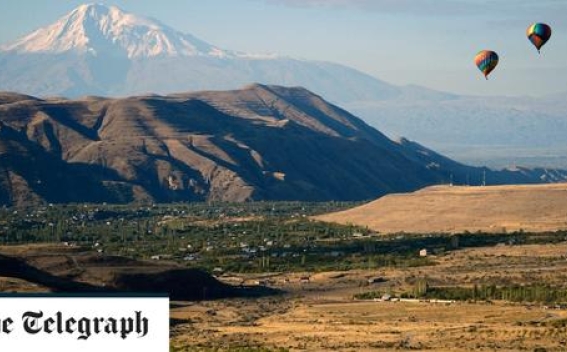 Armenian Ambassador to the United Kingdom Varuzhan Nersesyan has published an article in Telegraph and Economist, where he cited the Azerbaijani atrocities presented by a representative of the Scottish National Party.

Armenpress presents the article published in Telegraph which is entitled: “Can there be a just peace between Armenia and Azerbaijan? The Armenian perspective”.

“On September 22 SNP MP Chris Law, speaking in the House of Commons, delivered a chilling account of an elderly man decapitated with a knife and a female soldier with her eyes gouged out and replaced by stones. The victims he described were Armenians killed during Azerbaijan’s unprovoked military aggression during which hundreds of people lost their lives. Critical infrastructure, settlements, schools and hospitals deep inside Armenia were hit. More evidence of atrocities have emerged including a video of the extrajudicial killing of Armenian soldiers. These actions echo those of Daesh in Syria and the wave of international condemnation has been swift and unequivocal leading to calls for war crimes investigations.

And yet Azerbaijan talks of peace but what sort of peace do they seek?

This latest aggression follows a pattern. In 2021 Azerbaijan seized 42 sq.km of Armenian sovereign territory and since the September 2022 attack that figure has almost tripled in size. The autocratic Azerbaijani ruler praised the occupation of new swaths of lands and reiterated his irredentist narrative against Armenia, repeating that “no one and nothing could stop him” in achieving his ambitions. Two years after the fighting stopped, Azerbaijan still holds dozens of Armenian prisoners of war. Azerbaijan’s government has announced that it intends to erase Armenian inscriptions on religious sites in the territory that it occupied in the 2020 war against Nagorno-Karabakh.

The tragedy in Ukraine has been a useful distraction for Azerbaijan but perhaps it’s also a lesson we should all heed. There must be vigilance against any further military escalation and recognition that a clear path towards a comprehensive peace has already been laid out. Since the end of the war in 2020 the Armenian Government has adopted the “peace agenda” and has committed to opening an era of peaceful development in the South Caucasus.

In his speech to the UN General Assembly last month Armenia’s Prime Minister Nikol Pashinyan made it clear that the mutual recognition of each nations’ internationally recognised borders would mean that we can sign a peace treaty, but he also warned that without that recognition it would be a “phantom treaty” under which Azerbaijan could exploit the border delimitation process for new territorial claims and occupation. Furthermore, the Prime Minister reiterated that Armenia’s road network would be open to Azerbaijan to reach the Nakhijevan Autonomous Republic but that it wouldn’t constitute an extraterritorial corridor “as a pretext for a new aggression against Armenia”.

The Nagorno-Karabakh conflict cannot be resolved by force. Under existing international mechanisms Azerbaijan should enter into direct negotiations with the authorities there to resolve the issues around its final status, security and human rights for its people.

There is also room for cautious optimism. In early October, under EU and French mediation Prime Minister Pashinyan met Azerbaijani President Aliyev in Prague where it was agreed that an EU observer mission will be deployed to the Armenia-Azerbaijan border, a move our government has repeatedly called for.

Armenia welcomes the spotlight at this crucial moment for our region. We are a small but vibrant democracy and pose no threat to any of our neighbours. We have an independent press and a government tested by two free elections in four years. Freedom House finds that the independent media in Armenia “provide robust coverage challenging the narratives of state broadcasters” and outspoken NGOs operate freely. In contrast, according to Human Rights Watch in Azerbaijan the space for critical journalism and opposition political activity “has been virtually extinguished”.

When visiting Yerevan in September US House Speaker Nancy Pelosi said, “America is committed to Armenia’s security, democracy and we stand with Armenia in a difficult time”. She also mentioned President Biden’s invitation for Armenia to attend his first Democracy Summit. As he pointed out “democracy doesn’t happen by accident. We have to defend it”.

Armenia is ready for compromise but one that opens a path for a real and long lasting peace between neighbouring countries. Its territorial integrity cannot be subject to bargaining and Azerbaijan’s forces must withdraw from the areas it now occupies since May 12, 2021. The war in Ukraine and the energy crisis will not be enough to provide Azerbaijan with cover for any further aggression. Only constructive engagement, political will and mutual compromises will lead to a just peace for both countries”.