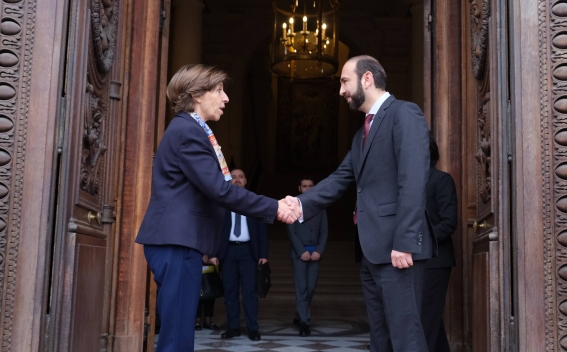 Ararat Mirzoyan and Catherine Colonna commended the high level of privileged Armenian-French relations based on the friendship and common values of the two peoples. The interlocutors discussed issues of the rich agenda of cooperation between Armenia and France.

Ararat Mirzoyan briefed the interlocutor on  the recent developments regarding the peace treaty between Armenia and Azerbaijan, the position of the Armenian side on the settlement of the Nagorno-Karabakh conflict, the border delimitation process between Armenia and Azerbaijan, and the unblocking of transport infrastructures in the region. The Minister of Foreign Affairs of the Republic of Armenia emphasized that the maximalist approaches and warmongering rhetoric of Azerbaijan are undermining the efforts towards establishing security and stability in the region.

Ararat Mirzoyan expressed his gratitude to Catherine Colonna for the principled position of the French side in terms of eliminating the consequences of the Azerbaijani aggression against the sovereign territory of the Republic of Armenia on September 13-14. At the same time, France's role as the Co-Chair of the OSCE Minsk Group in promoting the peaceful settlement of the Nagorno-Karabakh conflict was highly appreciated.

Both sides highlighted the importance of the statement adopted following the quadrilateral meeting held in Prague on October 6.

Issues on the activities of the EU Observation Mission in Armenia and the OSCE Needs Assessment Mission were also discussed during the meeting.