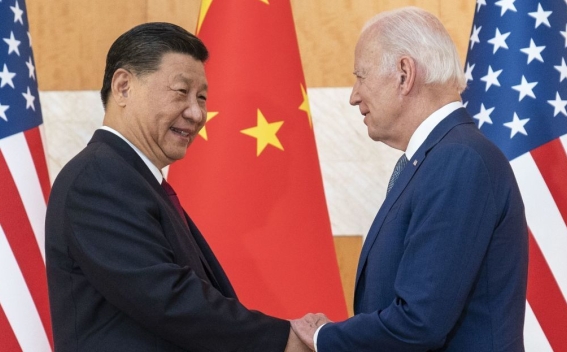 US President Joe Biden and Chinese leader Xi Jinping have started their meeting at a hotel in Bali, Indonesia, marking the first in-person conversation between the leaders of the world’s biggest economies since the pandemic emerged, Bloomberg reports.

The meeting comes on the sidelines of the Group of 20 summit in Bali. Officials from both countries have tempered expectations for the sit down, with tensions high over US curbs on chip exports to China and the status of Taiwan.

Aside from US-China tensions, a key focus of the summit will be Russia’s war in Ukraine, now in its ninth month and with Moscow on the back foot militarily. Russia’s Foreign Ministry denied a report that Foreign Minister Sergei Lavrov had been taken to the hospital. Lavrov arrived in Bali on Sunday to represent President Vladimir Putin, who is not attending in person.

The two leaders shook hands before the start of their meeting, which is expected to go for at least two hours, after which Biden plans to hold a news conference. “Good to see you,” Biden said to Xi before they went into a meeting room.

Meetings with the leaders of Japan, South Korea and Australia on Sunday were preludes for Biden’s much-anticipated meeting with the Chinese leader, White House officials said, with the president explaining his approach and seeking out their concerns.

BREAKING: Joe Biden and Xi Jinping meet ahead of the G-20 summit in Bali, the first in-person talks between the leaders of the US and China since before the Covid-19 pandemic https://t.co/iHKU2XijYT pic.twitter.com/WcIc08rqSF