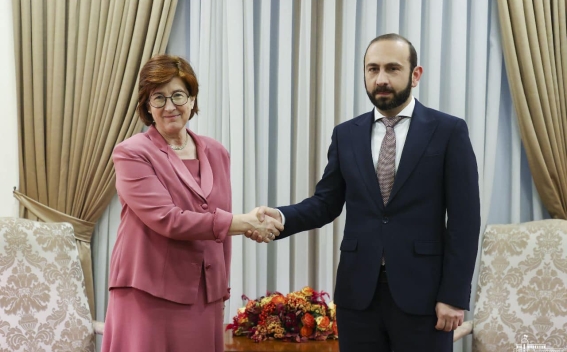 On November 25, Minister of Foreign Affairs of Armenia Ararat Mirzoyan received Ambassador of Canada to Armenia Alison LeClaire (residence: Moscow).
The sides emphasized the further development of Armenian-Canadian relations based on common democratic values ​​and mutual trust. In this context, the Foreign Minister of Armenia welcomed the decision of the Government of Canada to open an embassy in Yerevan and expressed conviction that this step will give a new impetus to bilateral cooperation.
Considering that this year marks the 30th anniversary of the establishment of diplomatic relations between Armenia and Canada, the interlocutors commended the current level of political dialogue and the dynamics of interstate contacts.
The readiness of the Government of Canada to support the strengthening of democracy in Armenia was noted.
Ararat Mirzoyan and Alison LeClaire highlighted the importance of expanding Armenian-Canadian trade and economic ties.
The Armenian side presented the consequences of the recent Azerbaijani aggression against the territorial integrity and sovereignty of the Republic of Armenia. Minister Mirzoyan underlined that Azerbaijan poses impediment for the establishment of peace and stability in the region with its maximalist position and aggressive actions.
Հայերեն На русском