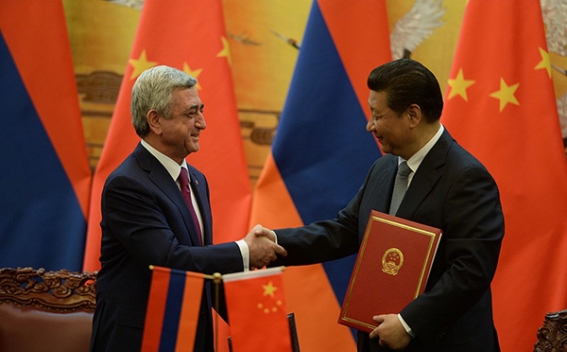 During the official visit of the president of to a joint declaration was adopted. That document has a strategic importance for further development of bilateral relations.

Declaration contains agreements on cooperation in various spheres, such as: economics, security, defense, culture, education, civil aviation, humanitarian sphere. Due to the broad inclusion of different spheres and high-level mutual understanding this declaration has all chances to become the basis for deeper and closer cooperation.

Of course the document pays attention to the main priorities of two countries: problem and Nagorno-Karabakh conflict. The sides restated their approaches concerning these two issues. The Armenian side reaffirmed its support for the "One China" policy - the Chinese government's efforts for country's unification, and against any form of the independence. It was stated that Armenia considers Taiwan as an inalienable part of the People's Republic of China and the Taiwan issue as China's internal affair. In its turn, the Chinese side confirmed its support for a peaceful and just settlement of the Nagorno-Karabakh conflict based on the main objectives and principles of the UN Charter as well as according to the universally recognized norms of international law. The position of - a member of UN Security Council - in Nagorno-Karabakh conflict can be estimated as balanced and objective. The fact that two sides are focusing on the principles of "justice and rationalism" for the settlement of the conflicts is the result of high-level interactions.

Another significant point in the declaration is the cooperation in the spheres of security and defense. Armenian-Chinese military cooperation has a long history, and this new declaration can become a stronger stimulus for strengthening the cooperation. According to the document and China undertake to cooperate in such fields as mutual visits of military delegations, military trainings and provision of military aids. It is important to mention that cooperation with , due to its military potential and its position in the arms exports, has an essential role for our country.

At the end I would like to stress the importance of the agreement on the participation of in the joint initiative of the Silk Road Economic Belt. Besides, Armenian and Chinese sides adopted Memorandum on Promotion of Cooperation in Building the Silk Road Economic Belt within the Framework of the Armenian-Chinese Joint Commission on Trade and Economic Cooperation between the Ministry of Economy of the of and the Ministry of Commerce of the People’s Republic of . This memorandum gives grounds to suppose that is seriously prone to participate in this promising project. On the one hand it would increase the transit role of , on the other hand, it would provide serious opportunities to develop and enhance its infrastructures.

To sum up, it can be stated that this declaration is providing higher level of Armenian-Chinese relationship, which would be productive for both sides.