The Situation in NKR: Who Started the First? 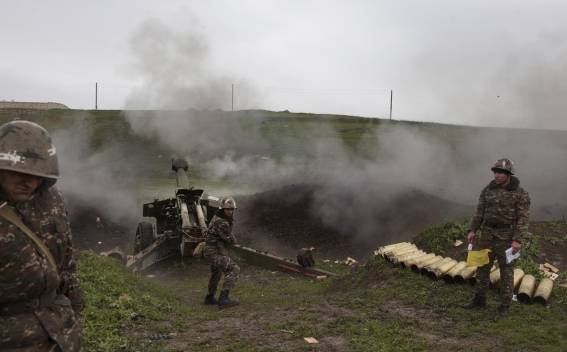 The first large-scale resumption of military actions since the conclusion of a trilateral agreement on ceasefire between Armenia, Azerbaijan and Karabakh in 1994 continues. Calling it as usual "violation of truce" is not relevant anymore. Despite the fact that many avoid using the term "war", in other words it is impossible to fully describe the situation. In the zone of conflict military air forces, all kinds of artillery and armored vehicles are being used, civilian settlements are under fire, women and the elderly are being killed. For a large-scale war – according to international definition of this word - the use of long-range missiles is only left.

At the same time it should be noted that the war is between the Nagorno-Karabakh Republic and Azerbaijan, and official Yerevan has not yet intervened into the developments. At the same time there is a large flow of Karabakh war veterans, voluntarily going to the front in Karabakh (according to the latest data, the number already exceeds 4 thousand).

The first Deputy Defense Minister of Armenia David Tonoyan during a meeting with military attaches of diplomatic missions of foreign countries in Armenia noted that the Armenian side is ready for any development of events, if necessary even to give direct military support to NKR. Moreover, the President of Armenia Serzh Sargsyan on April 2 during the meeting of the National Security Council ordered to prepare an agreement on mutual military assistance between Armenia and Nagorno-Karabakh Republic, which on the one hand will raise the bilateral relations to a new level, on the other hand will even more legalize the basis for giving military assistance to NKR.

Following this unpredictable escalation, especially from the outside, the question "who started first?"is quite interesting. The fact that recently violations of the ceasefire on NKR-Azerbaijani and Armenia-Azerbaijani borders have become quite frequent, is not something new and no matter how strange it may sound, they have become quite common. For these violations the sides blame each other. However, this time, as already mentioned, we are dealing with a different situation, and in order to point out the ventures, that provoked a new war, one should deeply look at some factors and motives of the parties.

Armenia, being a party to the negotiations on the settlement of the conflict and feeling the effects of the Azerbaijani-Turkish blockade on its own economy is more than interested in the peaceful settlement of the Karabakh problem. The resumption of military actions, given their cost and unpredictability, is not in the interests of Armenia. Even the relative peace in Karabakh for Armenia is preferable to any military action.

The possibility of resumption of full-scale war by the Nagorno-Karabakh Republic, too, does not seem to be plausible, given the limited resources and the prospect of immediate physical danger of its own citizens. In addition, Nagorno-Karabakh Republic, despite non-recognition and Azerbaijani blockade, develops quite effectively and to jeopardize this development without a guarantee of success is illogical.

In the case of Azerbaijan, the motivation is quite different. The chronicle of events, military analysis, the number and the variety of military techniques used indicate one thing - everything was carefully planned. It should also be noted that the timing for the start of military action was not accidental. The attack along the entire NKR borders began when the plane of the RA President Serzh Sargsyan, who was returning from the United States, was in the sky and, of course, Sargsyan was unable to give a quick response. It is hardly a coincidence.

The decision of Baku to resume large-scale military actions is simultaneously conditioned by several factors. The motives of Azerbaijan are quite diverse. Let’s refer to some of them:

First, the profit of the Azerbaijani economy, that is dependent on oil resources, significantly reduced due to the drop in oil prices, which has already led to social and economic unrests in different cities of Azerbaijan (Liman, Siyahani, Fizuli, Agsu, etc.). Given the possibility of a chain reaction of similar unrests and lack of prospects for the normalization of the economic situation, there is a need in Azerbaijan to distract the public's attention to "hot" topics.

Second, Azerbaijan cannot achieve its objectives in the negotiations on the peaceful settlement of Karabakh conflict, and the meeting with the representatives of the United States, probably ended for Aliyev with another disappointment. It should be recalled that in the recent years the pressure of mediators on Azerbaijan to agree on international mechanisms for monitoring the cease-fire regime, has increased, but the official Baku strongly rejects it.

Third, Ukrainian, Syrian conflicts seemed to have made the Karabakh conflict a secondary one, and Baku aimed at updating this unresolved problem on the international agenda.

Fourth, the sabotages carried out by the Azerbaijani forces along the borders, the regular shooting at civilians and war rhetoric, threatening to destroy the Armenians, did not receive a proper assessment by the OSCE Minsk Group (US, France, Russia), of the international community. All this has created an atmosphere of impunity for Baku.

Fifth, the Azerbaijani side has always expressed its dissatisfaction from the OSCE Minsk Group Co-Chairs by applying to them the policy of blackmailing. And recently Aliyev even accused the mediators that they hinder the settlement of the conflict. This escalation will be used by Baku as another tool of blackmailing - to create a new format of negotiations that it desires.

These motifs, as well as ungrounded belief in the superiority of their forces and their equipment, on which for many years Baku has spent billions of dollars, became a reason for Baku to resort to blitzkrieg. The purpose of Azerbaijan is to establish control over certain territories, to present it to its society as evidence of heroism of Ilham Aliyev and "liberation" of a land. However, most likely, Baku was mistaken in its calculations. Military operations are already entering to the fourth day, and Azerbaijan has not achieved the desired results, just on the contrary - among the Armenians there is a high level of self-mobilization, which further increases the unpredictability of further developments.