By Selling Weapons to Azerbaijan, Russia Becomes Its Accomplice 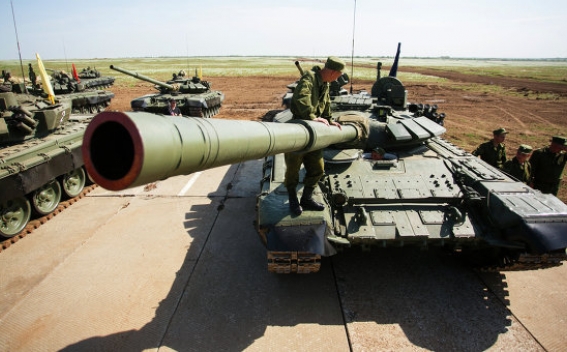 April's four-day war was perhaps somewhat predictable. Azerbaijani purchased weapons worth millions of dollars should have fired one day. It is a pity, but a fact that most of the weapons our enemy gets from our strategic partner, with whom we are in the same security system (CSTO).

Apart from the fact that arms trade is quite a profitable business for Russia, at the same time sale of weapons is explained by Russian side with the problem of maintaining the balance between Armenia and Azerbaijan.

''I believe that weapons can and should be acquired not only to be used ever but also to be a deterrence factor. And this is what all parties to a conflict should think about'', Russian Prime Minister Dmitry Medvedev said in an interview with a Russian television channel.

Even if this thesis can be accepted as truth, definitely not in the case of Karabakh conflict, when it is obvious that Azerbaijan uses the acquired weaponry against civilians, violating the norms of international humanitarian law.

For a moment, ignoring the fact that Russia is the Co-Chair of the OSCE Minsk Group, mediator of 1994 tripartite agreement of ceasefire, as well as the Armenian-Russian strategic partnership, we should try to understand the extent of legality of arms sale to Azerbaijan by Russia.

On April 2, 2013 154 in favor and 3 against votes (North Korea, Iran, Syria), as well as with 23 abstentions (including Russia), the UN General Assembly adopted "Arms Trade Treaty", aiming to make arms sales around the world more transparent and controllable.

Article 6 of the agreement defines all cases when the sale of weapons is prohibited. In particular, member states are not allowed to sell weapons if; 1) such a sale would result in violation of country's obligations in maintaining the UN Security Council decisions 2) will contradict its international obligations under bilateral agreements 3) if the selling side possesses reliable information that arms would be used for committing genocide, crimes against humanity, for attacks against 1949 Geneva Conventions, civilians and civilian objects or other war crimes.

April's four-day war showed that the arms purchased by Azerbaijan are also used directly for the destruction of the civilians and civilian objects, and therefore, according to the document, states should refrain from selling weapons to Azerbaijan

However, one of the main sellers of arms to Azerbaijan, who is our strategic ally - Russia, is not constrained by that provision. The point is that Russia has refused to sign the document presented by the UN, claiming that it is a "very weak" document, which, in addition, also "puts a burden on the shoulders of member states." Such a description was given by the Director of the Russian Foreign Ministry Department for Non-Proliferation and Arms Control Mikhail Ulyanov.

But even if we set aside the ''Arms Trade Treaty'', almost the same obligations are established by 1949 Geneva Conventions, the Article 1 of which states that "all states are obliged to maintain the international humanitarian law and ensure its protection’’.

This provision is interpreted as Convention member states obligation not to encourage (including through the sale of arms) any party to the conflict in violating the international humanitarian law or not to lead to similar violations by inaction.

On April 2-5, in the period of the war, crimes committed by Azerbaijani armed forces (for example, the horrific atrocities carried out in Talish village, the killing of 12-year-old child, the beheadings) clearly show that by selling arms to Azerbaijan the international community, including Russia, not only fails to fulfill its obligations to ensure the protection of international humanitarian law, but becomes an accomplice of Azerbaijan.