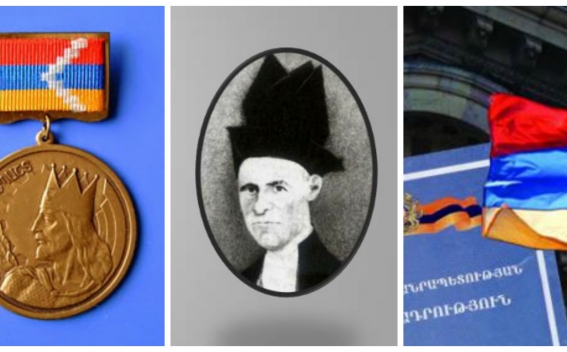 However, if we go deep into the Armenian history we will see that the roots of the Armenian constitution go back to the fifth century. After Nvarsak Treaty was signed in 484  (by the Treaty, signed between the Armenian general Vahan Mamikonian and the representatives of the Persian Great King Balash, freedom and autonomy for Armenians was ensured) the Armenian king Vachagan III the Pious declared Armenian historical provinces  of Artsakh and Utik as a kingdom, which was recognized by Persia. At that time Vachagan III the Pious adopted Canonical Constitution.  In the book "The History of the Country of Albania (Պատմութիւն Աղուանից, Patmutʿiwn Ałuanicʿ) the following is written about the adoption of the constitution:

"During the years of the Aghvan King Vachagan there were many conflicts between lay people and the bishops, priests and suffragans, the nobles and the commons. The king desired to convene a populous assembly in Aghven, which took place on the thirteenth day of the month of March." The outcome of that assembly was the adoption of a Canonical Constitution. Historiography dates this constitution, which contained 21 articles, to the year of 488. (more details can be found here)

Vorokait Parats (Որոգայթ փարաց) is scholarly considered as the first ever draft constitution of an independent Armenia, in which  social and state structure, the establishment of governing  bodies and their powers, rights and duties of citizens and other administrative issues of the future independent Armenia were described.  The constitution was written in the second half of the 18th century and embodied bourgeois ideas of enlightenment and progressive thought.  The author of the Constitution was Shahamir Shahamirian, an 18th-century writer and philosopher, notable figure in the Armenian liberation movement and a wealthy Armenian merchant in Madras (present day Chennai- capital city of the Indian state of Tamil Nadu). The constitution justified the paths of the Armenian liberation from the Turkish-Persian rule and advocated for people’s equal rights.

"Every human being, whether Armenian or of some other race, whether man or woman, born in Armenia or brought there from another country, shall live in equality and shall be free in all their occupations. Nobody shall have the right to enslave another person and workers should be paid like in any other kind of job, as is laid down in Armenian legislation."

However, during the 17-18th centuries both the attempts of liberation from the Turkish-Persian reign as well as the orders defined in the constitution just remained on the paper.

During the years of the First Republic of Armenia (1918-1920) although there were preconditions to write a constitution, two years were not enough to have it.

Already in the Soviet Times the constitution of the Soviet Armenian (adopted in 1922) was written in accordance with the rules in the Union and was revised three times during 70 years (in 1925,  1937 and 1978).

As it is stated in the beginning of the article, the Constitution of the Third Armenian Republic was adopted already on July 5, 1995. After Armenia’s becoming member of the Council of Europe, the Constitution was revised in 2005. According to the revisions some powers of President was transferred to the National Assembly, Prime Minister and other ministers.

A constitutional referendum was held in Armenia on December 6, 2015. It aimed at making amendments to the Constitution to pass from a semi-presidential system to a parliamentary republic. The amended Constitution will fully enter into force during the 2017–18 electoral cycle.

The opinions on the referendum were various from fierce criticism to strong appreciation. However one thing is clear, the effectiveness of newly amended constitution will largely depend on the political will of both the government and the opposition as well as civic awareness of different layers of our society.