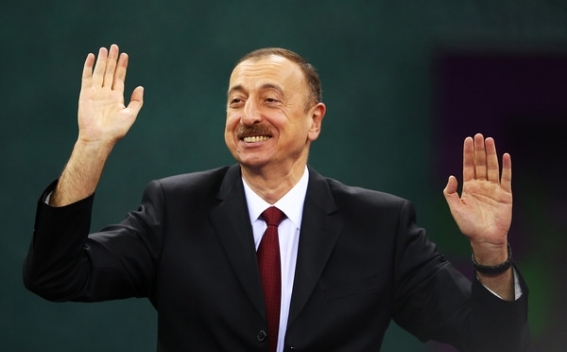 Azerbaijani President Ilham Aliyev gave an extensive interview to Dmitry Kisilyov, the general director of ‘’Russia Today’’ (Россия сегодня) state news agency. The fact that the interview was devoted to the 25th anniversary of Azerbaijan's independence, and the parties put all efforts to praise Azerbaijan, was quite expected.

However, the head of Azerbaijan, describing the situation concerning democracy and human rights in Azerbaijan, seemed to have revealed his talent as a fantasy writer. According to Aliyev, the West is using double standards towards Azerbaijan - "oasis of democracy", accusing the country of freedom restrictions.

The Azerbaijani leader did not limit himself with this only. He tried to introduce "the democracy" he built. According to Aliyev, Azerbaijan provides all democratic norms without any exception. Among all freedoms counted, Aliyev mentioned  "the freedom of protest." "On the eve of the referendum, the opposition organized a demonstration in the center of the city. Another issue is that it was mostly attended by 800 people and their friends and relatives. There was no restriction. We have freedom of press, hundreds of newspapers, magazines, television, no censorship on the Internet, and more than 75% of the population use the Internet." Azerbaijani standards of democracy are really impressive, but not connected with the classical democracy. Moreover, it is quite a surprising fact that only 800 people protested in a country with 9.7 million people. But according to Aliyev it was quite logical and normal.

Aliyev's ideas about press freedom, in turn, are only associated with quantitative indicators. But an important factor is dismissed here: dissent. But how can we speak about dissent in a country that is a serious contender of record (it did not manage to go ahead from its elder brother, Turkey) for a number of political prisoners, among whom there are also opposition journalists, publicists. Azerbaijani authorities, creating an atmosphere of total fear, confronted all the dissidents by a difficult dilemma: either a prison or voluntarily exile.

Aliyev, however, has a different opinion on all this. "There are no anti-governmental sentiments in our country." However impressive, still it is contradicting all the laws describing the behavior of society.

Sociologists have repeatedly proven the fact that 20-25% of the population in any society has a certain dissatisfaction with the government, and 5-10% of the total population, are potential participants in the protests. Naturally these indicators in each country are a little higher (especially in developing countries) or lower. Aliyev however broke this rule in sociology. Only 800 out of 9.7 million people in Azerbaijan have a negative attitude towards the government. It sounds quite funny, though.

Aliyev-Kisilyov "talk-show" really can be considered exceptional, but not for the memorable or important ideas, but for the record number of lies and absurd point of views expressed per minute.