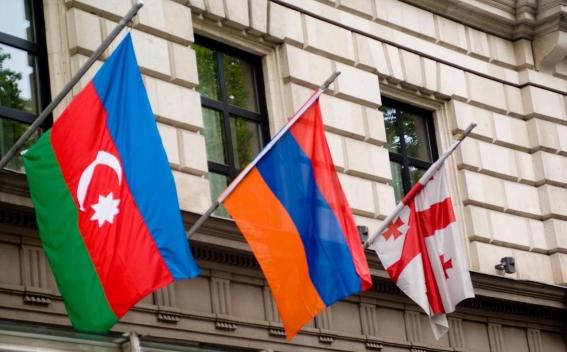 2016was a year of challenges and opportunities for the countries of the region. Georgia, as a country with an active role in the region, is trying on one hand to strengthen and develop its relations with neighbors, on the other hand to promote its own interests in the region by maneuvering effectively.

Georgia-Turkey: Turkey, according to annual data, continues to be the main trade partner of Georgia. The sides began to implement the agreement on "Georgian-Turkish strategic council", achieved in January in Davos. Thus in July, the first meeting of the council was held, led by the Prime Ministers of the two countries. The Council aims to promote the development of bilateral relations, in particular, on the implementation of bilateral programs of regional significance. Interestingly enough, the visit of Giorgi Kvirikashvili to Turkey was the first official foreign visit after the failed coup, which is also a symbol of support for Turkish partners.

Georgia-Azerbaijan: Azerbaijani direction in 2016 was perhaps the most active one in the foreign policy of Georgia. Most of the bilateral visits were concerning the problem of the gas supply to Georgia. Because of some technical factors, Azerbaijan could not provide the growing demand for gas in Georgia, therefore Tbilisi began to look for alternative ways, including examining the possibility of increasing the volumes of gas from "Gazprom". This, of course, caused some concerns in Baku following intensive negotiations. As a result, in March, a new version of the agreement was signed for the supply of Azerbaijani gas, where both Azerbaijan maintained its monopoly position, and Tbilisi achieved some reduction in the price on the so-called "Social gas" delivered from Azerbaijan to Georgia (about 500 million cubic meters per year).

Intensive work was carried out in the direction of regional cooperation among Azerbaijan-Georgia-Turkey. In this regard, active steps were made to implement the railway project ''Baku-Tbilisi-Kars'', which is planned to operate in 2017. In May Georgian delegation participated in the ceremony of launching the construction work of the Trans Adriatic Pipeline (TAP). It is assumed that in 2019, this 800 kilometer pipeline, continuation of TANAP pipeline (which should begin in Azerbaijan and reach Greece through Georgia and Turkey), will connect Greece and southern Italy with each other, allowing the Azerbaijani gas to reach Europe.

The format of cooperation of Azerbaijan-Georgia-Turkey is also quite active. During this year, according to tradition, some trilateral meetings of Prime Ministers, Foreign Ministers and the Ministerial Offices of these three countries were held. From this point of view quite symbolic was the meeting of the defense ministers of the three countries in Gabala, as a result of which the sides agreed to deepen cooperation in the fields of military education, energy security, etc.

Georgia-Iran: From the moment of lifting the sanctions, Tbilisi started to be quite interested in the reconstruction and development of relations with Tehran. In this direction, perhaps quite a significant step was the recovery of visa free regime for Iranian citizens by Tbilisi in 2016. According to various estimates, such a move may contribute both to the increase of the number of Iranian tourists to Georgia, and the Iranian capital in Georgian economy.

During the year the possibility of supply of Iranian gas to Georgia was considered, and Armenia and Azerbaijan were seen as potential transit corridors. Already in July of this year, the National Iranian GasExportCompany (NIGEC) and the Georgian International Energy Corporation (GIEC) signed an agreement, according to which in the period of 4 months, through the territory of Armenia to Georgia  a total of 40 million cubic meters of gas will be exported.

However, Georgian-Iranian cooperation was not limited to energy only. Active steps to implement the communication projects have been undertaken, in which Armenia was also regarded as an important link.

Georgia-Armenia: Armenian-Georgian cooperation in 2016 was quite dynamic. During bilateral visits the sides tried to record progress  on important questions on the agenda, among which a lot of attention was paid to the implementation of joint regional projects.

During the year, we held a lively discussion on the transit of the Iranian gas to Georgia via Armenia, which could be quite important and strategic project for Armenia, both in terms of the implementation of transit capacity and in terms of increasing importance of Armenia for Georgia.

The project is realistic enough, and there are already preliminary agreements for the supply of Iranian gas to Georgia via Armenia, which, we hope, in 2017 will be further strengthened.

In addition, the energy ministers of Armenia, Russia, Iran and Georgia signed a road map and a memorandum of understanding on the formation of the electricity corridor ''North-South'' in April. The project is quite a promising one, as the unification of energy systems of the four countries will make it possible to exchange energy flows with capacity up to 1200 MW.

In addition to energy field, the Armenian-Georgian cooperation is also active in the implementation of transport corridor North-South. In 2016 the Armenian authorities not only continued to actively promote the idea of ​​creating a transit corridor from Black Sea to the Persian Gulf, passing through Armenia, but also took certain steps to implement it. During the year, in particular, the program of multimodal transportation was developed and successfully tested. In November, as a sample, two containers were brought from Europe to Poti by water, and then by train they were brought to Armenia - to Yeraskh station from where by trucks to Iran. According to preliminary data, the Road Transport of containers was carried out for 38 hours and it is possible to improve this result. Given the time of transit and the fact that transport costs are cheaper by 1-2% compared with the same carriage on the territory of Turkey, this project has a great ability to be fully implemented, which is very important for Armenia, and for strengthening its role as a transit country.

It is noteworthy that during April war, the Georgian side had quite balanced, neutral position, while the Georgian government proposed mediation. At the same time it should be noted that certain concerns were seen in Georgia, which were quite logical taking into account the good relations of Tbilisi both with Yerevan and Baku, and also the presence of large Armenian and Azerbaijani diasporas in Georgia.

A significant event in 2016 was also the opening of the newly constructed border crossing point in Bagratashen. In November, the President of Armenia Serzh Sargsyan and Prime Minister of Georgia Giorgi Kvirikashvili personally participated at the official opening of the checkpoint, and then also got acquainted with the preparatory work for the construction of binding the two countries, "Bridge of Friendship". The bridge, the construction of which should begin in 2017, will further simplify service freight and passenger traffic.

Summing up Georgia's regional policy of 2016, we can evaluate the year as a fairly active and effective one. Despite the fact that it was a pre-election year, with all its ensuing consequences, Tbilisi managed to achieve significant results in total, both in terms of the development of relations with its neighbors, and of strengthening its role in the region.