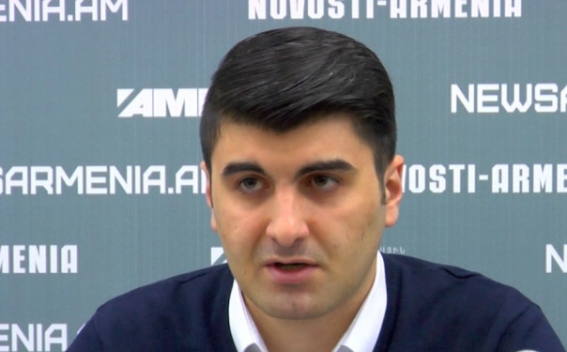 The opening of the Baku-Tbilisi-Kars railway took place on November 30 after quite a long delay. The railway construction started in 2007 on the basis of the Azerbaijani-Georgian-Turkish intergovernmental agreement. Its mission is to provide East-West alternative transport links.

The opening of the Baku-Tbilisi-Kars railway was accompanied by a massive media campaign organized by Baku, which became a reason for various comments in public circles in Armenia. When considering the role of the Baku-Tbilisi-Kars railway in the region and from the point of view of the national interests of Armenia it is desirable to take into account several important factors.

1. The Baku-Tbilisi-Kars railway is, first of all, a political project initiated by Azerbaijan and Turkey. The aim of the project was the creation of a link connecting the East to the West, which would bypass Armenia, Russia and Iran.

In case of Turkey, it is viewed as another tool to strengthen its position in the South Caucasus, while the initiative of Azerbaijan is aimed at isolating Armenia first of all. All of this was evident at the initial stage of the project, and it was not accidental that instead of exploiting the already existing Gyumri-Kars railway, Baku initiated the construction of a totally new one. It was because of this circumstance and the efforts of the Armenian side that the project received neither the US nor the EU support, and no international fund agreed to fund it.

2. The effectiveness of the project for Georgia is not quite definite. For Tbilisi, the project is crucial to establish ties with international infrastructure systems as a transit country in terms of enhancing its international reputation.

As for the economic effectiveness of the project for Georgia, two factors should be taken into account. In the short term, the Georgian side will not have any income from the railway transportation. Azerbaijan has provided a $ 775 million loan to Georgia for the construction of the railway in Georgia. The first transfer of $ 200 million was granted in 2007 for a 20-year term with 1% interest rate. The second transfer of $ 575 million was granted in 2011, for 25 years and 5% interest rate this time. It means that at the initial stage Georgia will fulfill its credit obligations with any income from the transit.

It is noteworthy that according to some experts, under existing agreements Azerbaijan will be able to define transit tariffs on its own and it is not yet clear how profitable they will be.

To assess the impact of the railway on Georgia's economy, it is important to pay attention to the operation of the Georgian ports and the Georgian railways. Most of the actual Azerbaijani cargo (possibly also the cargo of Central Asian countries coming from Azerbaijan), which previously moved to Black Sea ports of Georgia, are likely to be transported to Europe (or Turkish ports) by the Baku-Tbilisi-Kars railway. It is more than obvious that such a change in cargo flow will seriously damage the Georgian ports and projects aimed at increasing their transit potential. It is not accidental that the newly-appointed Prime Minister of Georgia Bidzina Ivanishvili openly stated in December 2012 that there is a threat that the Baku-Tbilisi-Kars railway exploitation will reduce the volume of cargo traffic on the old Georgian railway and Georgian ports. After this scandalous statement by Ivanishvili, Baku made considerable efforts to minimize the manipulation of these challenges (including among the expert circles), and has recorded some success since.

3. The Baku-Tbilisi-Kars railway is summposed to transport 6.5 million tons of cargo in the initial stage, and it is expected to increase it to 50 million tons by 2050. The set bar is quite ambitious, given that experts are skeptical even about the 6.5 million tons of cargo at the initial stage. According to preliminary estimates, the project's economic efficiency cannot be maintained without the involvement of the Central Asian countries. It was quite symbolic that besides the leaders of Azerbaijan, Georgia and Turkey, the representatives of Uzbekistan and Kazakhstan also took part in the opening ceremony of the railway in Baku.

It is noteworthy that the full use of the potential of the Baku-Tbilisi-Kars railway is possible only when the Chinese goods are also directed to this route. Perhaps this is conditioned by the fact that the initiators of the railway are trying to present it as an inseparable part of the new "Silk Road." Certainly it can be viewed as part of the Chinese initiative, but only as an alternative route.

In the Chinese business circles the Chongqing-Dostik-Moscow-Brest-Lodz-Duisburg route is more preferable, which connects China and Kazakhstan to Poland and Germany through Russia. By 2017, more than 100 trains crossed this railway, while in the past two years only two trains from China passed through Georgia.

4. As for the Armenian side, it should be noted that the exploitation of the railway will hardly have any significant impact on the economic opportunities of Armenia.

It is noteworthy that Azerbaijan has developed a contractive basis for the construction and exploitation of the railway so that Georgia could not independently make decisions on the Georgian section of the railway. In this case, Baku's main goal was to prevent the transportation of Armenian cargo by the Baku-Tbilisi-Kars railway.

In the current situation, among the Armenian side actions (in case of an official rejection of the Armenian goods transportation) it is possible to consider the issue in the context of international law. That is to say, it is possible to set up an expert commission that will analyze the extent to which the ban on transportation of Armenian goods complies with the principles of international law and ratified conventions (including the Convention on the Landlocked Countries) and thus initiate a legal process.

In addition, it is necessary to make all the efforts for the full development of the Black Sea-Persian Gulf Transport Corridor. In this regard, it is important to give a new impetus to the North-South project and to finish it as soon as possible. It is necessary to improve the system of multimodal transportation from Europe to Iran through Armenia, which was tested for the first time by the end of 2016.

In summary, we can state that the implementation of the Baku-Tbilisi-Kars project should be perceived in a more adequate way in Armenia, taking into account the absence of real losses and the long-term nature of the process (about 10 years). Moreover, it should be an additional stimulus to break the blockade and isolation of Armenia by Turkey and Azerbaijan.