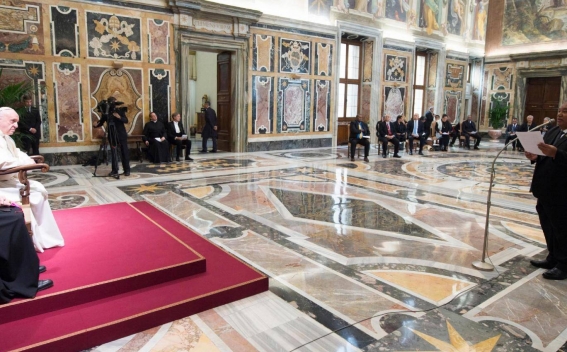 The pontiff spoke out as he met a delegation of Pacific leaders in the Vatican and told them he shares their concerns about rising sea levels and increasingly intense weather systems that are threatening their small islands.

He decried in particular the state of oceans, where overfishing and pollution by plastics and micro-plastics are killing fish stocks and sea life that are critical to Pacific island livelihoods.

While several causes are to blame, "sadly, many of them are due to short-sighted human activity connected with certain ways of exploiting natural and human resources, the impact of which ultimately reaches the ocean bed itself," the pontiff warned.

History's first Latin American pope has often spoken out against global warming and the impact it has in particular on poor and indigenous peoples. His landmark 2015 encyclical "Praise Be" denounced how wealthy countries exploit the poor, risking turning God's creation into an "immense pile of filth”.