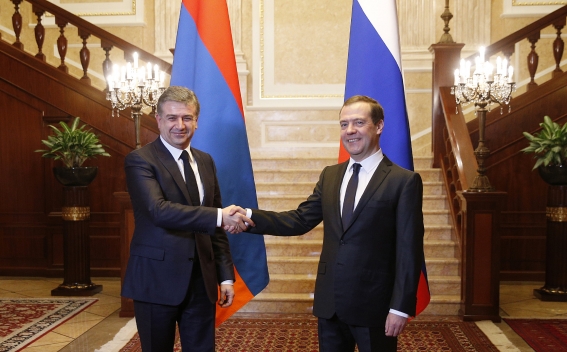 Acting Prime Minister Karen Karapetyan sent a congratulatory message to RF Premier Dmitry Medvedev on the occasion of the 73rd anniversary of Victory in the Great Patriotic War.

Please accept my sincere congratulations on the 73rd anniversary of Victory in the Great Patriotic War.

This day is permanently engraved in our history. The heroic deeds of our fathers and grandfathers - the winners of the heroic battles - who fought side by side on the battlefields and worked selflessly on the rear front, made a decisive contribution to the cause of liberating the world from fascism.

The fraternal friendship of our two peoples, which was strengthened during the cruel years of the war, is a solid foundation for the Armenian-Russian interstate relations, which are developing dynamically along the lines of allied partnership for the sake of future generations.

Dmitry Anatolevich, please convey words of deep gratitude to the veterans living in Russia. I wish them robust health and well-being, as well as peace and prosperity - to all Russians.”