Armen Sargsyan: "My grandmother Fleeing from the Genocide Took the Most Precious Things – Her Son and the Bible" 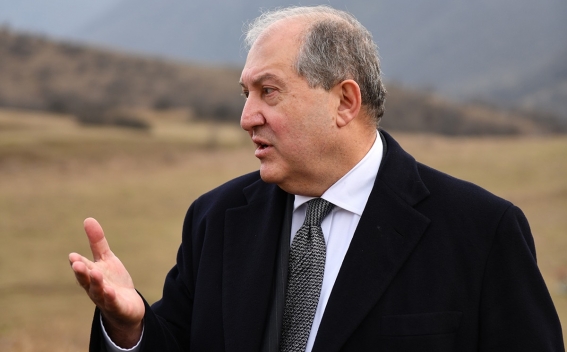 President Armen Sarkissian participated today at the Third Global Forum Against the Crime of Genocide which is dedicated to the issues of prevention through education.

In his welcoming remarks, after wishing the participants of the international Forum “bari luys” in Armenian, President Sarkissian noted that in Armenian, “bari lyus” means not only “good morning” but also “good” or “kind light”, and throughout the human history we have had times when light prevailed but also the occurrences of evil.

“The fight between light and darkness is current even today. This Forum is meant to fight against that very darkness and evil. There are multiple components which the evil manifests itself through: the way we treat our beloved home, our planet Earth, rights of the people of different race, sexual orientation, or religion. Unfortunately, evil is not always defeated.

In the 21st century, in the epicenter of very rapidly changing events, everything that is taking place on this planet, whether good or bad, spreads instantly, forms roots, and acquires followers. I will not call it revolution, industrial revolution. Now we are entering other era which is rather a rapid evolution. The greatest evil of that era is the crime of genocide which, unfortunately, also finds a breeding ground. Obviously, it will not cease to exist if don’t fight against it.

Before turning to the lighter side, I would like to talk about this Forum. Probably, there are two or three places in the world where such a forum can be held. Regrettably, Armenia is one of them because Armenians, as a nation, suffered the pain of genocide.

There are two places in Armenia which symbolize those events: The first is the Genocide Memorial and Museum, the second – is this very place, the Matenadaran. When I compare these two sites, they come out as two temples – one as a memorial to the martyrs, the other – the Matenadaran, symbolized light, the place where we assert - never again. The Matenadaran proves that light eventually conquers pain and darkness. I am confident that light and good will prevail. This is also a place where the memories of the Genocide are profound.

Genocide is not only an organized crime which is meant to annihilate a nation, an ethnic group, people who are different. This is an act against tolerance meant to eliminate history, culture, arts, and knowledge. Thus, it’s a much greater calamity, a greater and a much more vicious crime than just a murder of the people. At the same time, the Matenadaran is the place which states “do whatever you want, you will not erase.” It is special also from the human history point of view.

There are thousands stories about the Armenian women who fleeing from the Genocide had taken with them the most precious thing – the Book. My grandmother too, who was from a prosperous family in the Ottoman Empire, fleeing from the Genocide had not taken anything, even clothing or jewelry, but took the most precious things – her son and the Bible.

Painfully, she had lost her son on the way to Etchmiadzin but managed to bring the Holy Bible with her. It exists even today and contains not only 450 years of history but also the memories of the child lost, the child who never grew up, never came to age, never brought his talent to arts, culture, business, politics, never had children and grandchildren. It’s a living memory and a temple of light. The Armenian Genocide started 103 years ago, and today we remember all those who had lost their lives, homes, friends, families, children.

One hundred three years later we proved to the entire world that light and good prevail, and the Republic of Armenia, the Armenian people is the proof of it. We are a small people but a global nation. The whole world knows Armenians as hardworking, honest, very patriotic people, who live in different countries and are good citizens of that countries, work for success of that countries. Deep inside they nurture that pain but, at the same time, they have dignity and pride – we can defeat the evil. This building is a proof of it, it safeguards important assets, assets which were meant to be destroyed, which were targeted but survived - history, culture, legacy, love, religion, God, and humanity.

I greet you all in Armenia, welcome to our nation which was able to overcome the most gruesome, the cruelest crime ever – the crime of genocide.

Armenia is with you, and all over the world Armenians are fighting against evil in the name of light.”