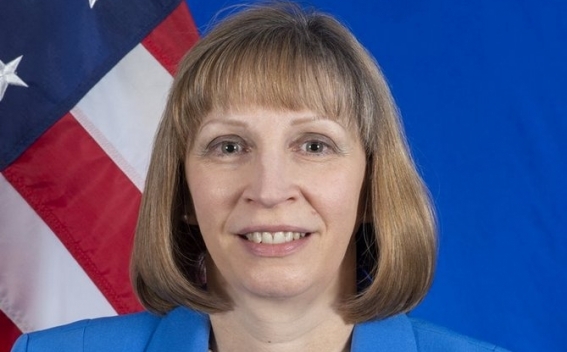 Newly appointed ambassador of the US to Armenia has taken up her job related duties. Last week in Washington the ambassador’s oath taking ceremony took place.

Earlier, during hearings in the foreign relations committee of the Senate Tracy stated that the overall goal of US Armenia policy remains an independent, democratic, and prosperous Armenia, at peace with its neighbors.  Situated astride a geographic and cultural crossroads, Armenia has always balanced competing interests, and the US continues to affirm their commitment to a sovereign Armenia, free to choose its own partners.

Coming to the “Velvet revolution” the diplomat stressed that in April and May of this year, hundreds of thousands of Armenian citizens took to the streets with determination but without violence to hold their government accountable. “Like so many others, I was heartened to see a peaceful transition of power,” Tracy said and added that  Armenia still has work ahead, however, to cement the gains of the past six months.

Speaking about Karabakh conflict the ambassador noted that the peaceful settlement of the Nagorno-Karabakh conflict is essential for a more secure and prosperous future for Armenia and the South Caucasus.  “As Co-Chair of the OSCE Minsk Group, the United States is working to help the sides achieve a peaceful, lasting negotiated settlement of the conflict based on the principles of the UN Charter and the Helsinki Final Act, including the non-use of force or threat of force, territorial integrity, and the equal rights and self-determination of peoples.  If confirmed, I will support the Administration’s commitment to achieving this goal.

Speaking about the Armenian Genocide the ambassador noted that the horrific events of 1915, the Meds Yeghern or Great Calamity, when 1.5 million Armenians were deported, massacred, or marched to their deaths in the final years of the Ottoman Empire, must never be forgotten.  ”If confirmed, I pledge to do everything in my power to remember the Meds Yeghern victims and uphold that solemn commitment,” she said and at the same time stressed that progress toward reconciliation with Turkey can help reduce Armenia’s isolation and bolster its economy. “Towards that end, we encourage Turkey and Armenia to acknowledge and reckon with painful elements of the past.  If confirmed, I will do my best to support Armenian and Turkish efforts to forge a more peaceful and productive relationship,” the ambassador stressed.

Lynne Tracy served as Principal Officer at the U.S. Consulate in Peshawar, Pakistan from September, 2006 to August, 2009. Since joining the State Department in 1994, Ms. Tracy’s overseas assignments have been concentrated in Central and South Asia, with postings in Astana as Principal Officer (2004 -2006), Kabul (2002-2003), Bishkek (1997-2000) and an earlier tour in Peshawar (1995-1997). Her Washington assignments include Kazakhstan Desk Officer (2003-2004), Georgia Desk Officer (2001-2002) and the Office of the Special Ambassador to the Newly Independent States (2000-2001). She is a recipient of several Superior Honor Awards. On August 26 2008 was targeted by the extremists. Regardless of the warnings she continued to stay in Peshawar and for that received Secretary’s Award for Heroism in 2009.