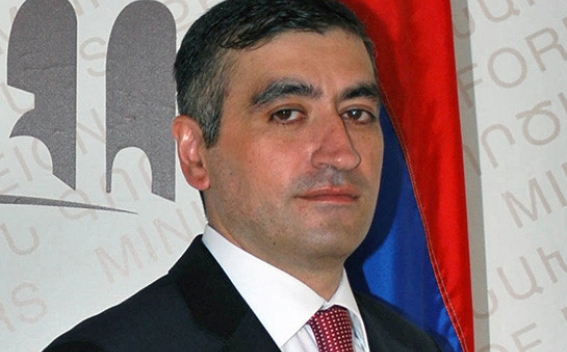 In his speech in light of the current issues under consideration during Session 1226 of the OSCE Permanent Council, Armenia’s Permanent Representative to the OSCE, Ambassador Armen Papikyan drew the OSCE member states’ attention to the statements made by the President of Turkey on April 24th, the day marking the 104th anniversary of the Armenian Genocide, as well as Turkey’s hindrances to peaceful rallies and freedom of speech, reports the news service of the Ministry of Foreign Affairs of Armenia.

Touching upon the April 24th statement of the President of Turkey, Ambassador Papikyan stated that those kinds of statements are more than offensive and painful manifestations of disrespect towards the memory of the victims and the survivors, as well as an extremely troubling attempt to justify the genocide and one of the brilliant manifestations of Turkey’s policy of denial.

The ambassador noted that the Turkish president’s statement attests to the intention to fully or partially annihilate the Armenian people as a national, ethnic and religious group in the Ottoman Empire.

Touching upon the violations of the fundamental rights to peaceful assemblies and freedom of speech in Turkey, Ambassador Papikyan particularly touched upon the Turkish authorities prohibiting the Armenian Genocide remembrance event held by the Turkish Human Rights Association Istanbul Office at Sultanhamet Square in Istanbul, the square where 235 prominent Armenian figures, including Members of the Ottoman Parliament, religious and community leaders, remarkable writers and artists were brought on 24 April 1915 and later murdered.

The ambassador also informed that, according to press releases, on the same day, an Armenian activist was apprehended by Turkish police officers for speaking out about the Armenian Genocide. In closing, Ambassador Armen Papikyan expressed gratitude to the OSCE member states for Armenian Genocide recognition and the decisions, proclamations and initiatives aimed at commemorating the victims of the genocide and called on the international community to strictly condemn the Turkish government’s insult to the memory and dignity of the Armenian Genocide victims and survivors.