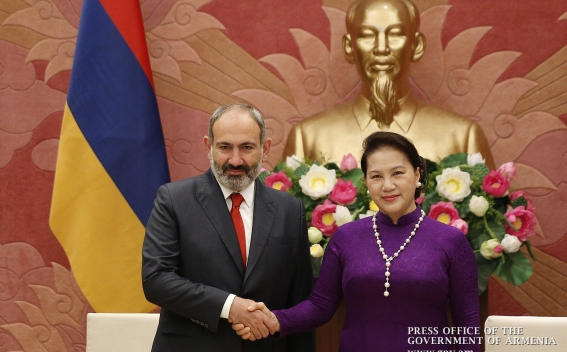 Appreciating the Prime Minister’s official visit to Vietnam, Nguyen Thi Kim Ngân said it might give new impetus to bilateral relations in a variety of spheres. “We are closely following the ongoing developments in Armenia and congratulate you on the achievements you have made in terms of enhancing Armenia’s position in the international arena. I am aware that yesterday you had effective and open discussions with our country’s Prime Minister,” Nguyen Thi Kim Ngân said, noting that the National Assembly of Vietnam would contribute to the development of bilateral ties.

Thankful for the warm welcome, Prime Minister Pashinyan noted that he had had fruitful talks with his Vietnamese counterpart, at which specific agreements were reached.

“A wide range of issues will be discussed at the forthcoming meeting of the intergovernmental commission due to be held this fall in Yerevan. Decisions will be passed on visa facilitation, tourism development, double taxation, etc. We have agreed to hold a business forum on the sidelines of the sitting in order to promote the development and expansion of trade and economic ties,” the Prime Minister said.

According to the head of the Armenian government, Armenia and Vietnam are bound by deeply-rooted ties of friendship. The Premier noted that people in Armenia have kept warm recollections of the landmark visit paid to our country in 1959 by Hồ Chí Minh, the founder of the Socialist Republic of Vietnam.

Appreciating the development of intergovernmental and inter-parliamentary cooperation, Nikol Pashinyan conveyed RA National Assembly Speaker’s invitation for Nguyen Thi Kim Ngân to visit Armenia at her convenience. The invitation was accepted with pleasure.

The Armenian Prime Minister and the Speaker of the National Assembly of Vietnam hailed the ongoing interaction between the two countries’ parliamentarians on the international platforms and considered it necessary to continue cooperating in tune with each other’s positions.

It was underscored that the Armenian Prime Minister’s visit has fostered a favorable atmosphere of cooperation and the sides should continue making joint efforts to achieve specific results.