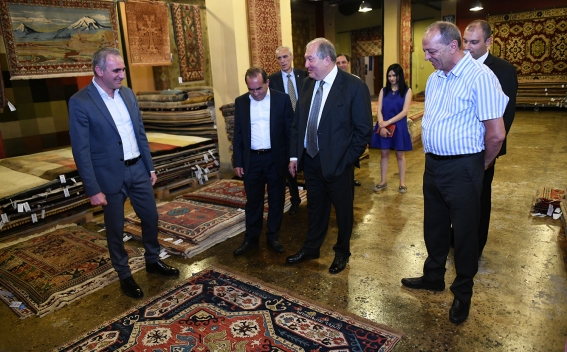 President Armen Sarkissian visited today the Megerian Carpet company. The President was familiarized with nearly a one hundred years-long history of the company which presents the Armenian art of carpet-making in different countries of the world.

The Megerian Carpet started its activities in Armenia in 2000. The company is manufacturing hand-made carpets of different design snd density, as well as repairs and renovates hand-made carpets

The President was familiarized with the history of the ancient carpets from different regions of Armenia, Artsakh, and Western Armenia. In particular, the 160 years old Vahanagorg, which has a touching story behind it, is exhibited in the Museum: During the Genocide, a desperate mother had cut it in two and gave to her daughters so that they could find each other if separated. It happened exactly that way: 50 years later, the sisters found each other in New York because of the two pieces of the rug. The Museum has also a replica of the world’s oldest carpet, Pazirik. The original is on display in the Ermitage.

The executives of the Megerian Carpet told the President about the current activities and forthcoming plans of development. President Sarkissian encouraged them to work also in Gyumri.