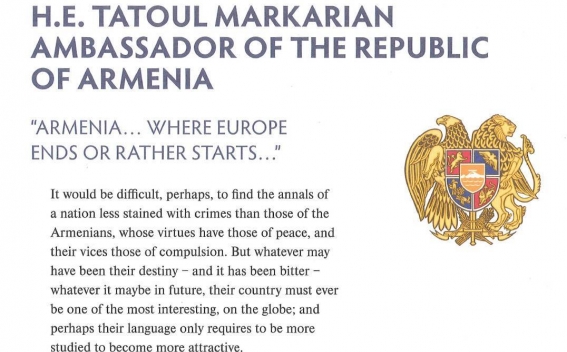 The article “Armenia…Where Europe ends or rather Starts” by Armenian Ambassador to Belgium Tatul Margaryan has been published in the 60th volume of Diplomatic World, one of the most famous European magazines, Armenpress reports citing Armenian foreign ministry.

In his article the Ambassador briefly introduced the history of Armenia as the first Christian state, its rich national culture and beautiful nature.

The Armenian Ambassador also touched upon the recent developments of the country’s domestic political, public and cultural life, as well as the prospects, introduced Armenia’s economic priorities, the traditional and new branches of the economy, the business and investment opportunities, as well as tourism attractiveness.

Tatul Margaryan also touched upon Armenia’s main foreign policy directions, in particular the relations and cooperation prospects with the EU.