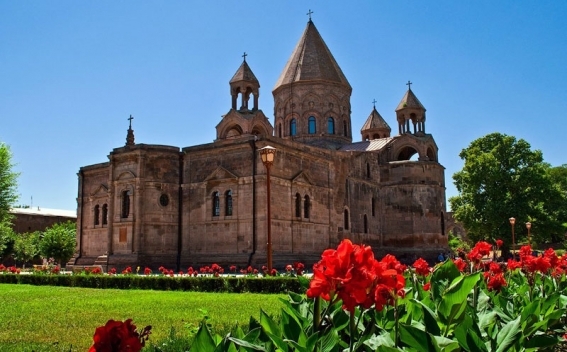 The Feast of “Shoghakat” of Holy Etchmiadzin commemorates the inauguration of the Cathedral of the Mother See. The fifth century Greek historian Agathangelos tells us of St. Gregory the Illuminator’s divine vision, wherein our Lord Jesus Christ descends from Heaven and strikes the ground with His golden hammer.  In view of biblical Mount Ararat, in the city of Vagharshapat, the place where the Only Begotten descended identified the site for the foundation of the new cathedral of the Christian Armenian Nation. The vision of Gregory became known as “Shoghakat”, as the Saint saw a fiery column descending from the sky, Qahana.am writes.

For 1,700 years, the Mother See of Holy Etchmiadzin has been, and continues to be, the spiritual heart and center of the Armenian Church, and is her most sacred sanctuary. Her spiritual, national and historical significance has only increased through the centuries.

Through the vision of St. Gregory, God Incarnate descended upon the soil of Armenia and predetermined her future, making Armenia the first nation in the world to adopt Christianity as its official religion.