Erdogan Demands US Hand Over SDF Chief to Turkey 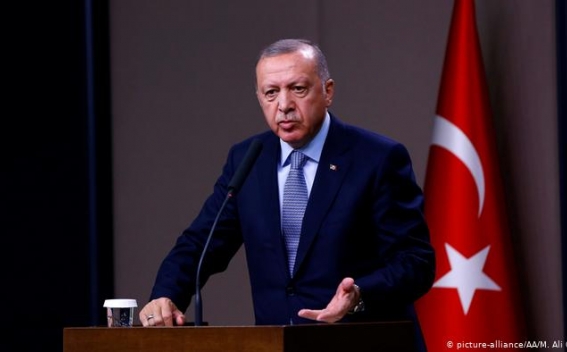 DW
Turkish President Recep Tayyip Erdogan on Thursday urged the US to hand over the commander of a US-backed Kurdish-led force that fought against the Islamic State, insisting he was a "wanted terrorist", alaraby reports.

Ties between the United States and Turkey are particularly strained over years-long American support for the Syrian Kurdish YPG militia, viewed as terrorists by Ankara.

Much of the Syrian Democratic Forces (SDF) who fought against the Islamic State extremist group backed by US air support are Kurdish fighters from the YPG.

Mazlum Abdi is head of the SDF.

"This codenamed Mazlum is a terrorist sought with a red bulletin (issued by Interpol)," Erdogan said in an interview with state TRT broadcaster. "America must hand over this man."

A group of senators including Lindsey Graham this week urged the US state department to fast-track a US visa for Abdi to enable a visit where he can speak to officials on the situation unfolding in Syria.

US President Donald Trump, said in a tweet Thursday that he had talked with Mazlum Abdi and "really enjoyed" the conversation.

"He appreciates what we have done, and I appreciate what the Kurds have done," the US president said.

Erdogan said he criticised Trump directly in a phone call earlier this month over a letter from Abdi sent with a much derided letter from the American head of state.

"I said to him, 'it was not at all appropriate, I condemn this attitude'" the Turkish leader added.

But Erdogan said he still planned to go to the US to meet Trump on November 13.

Relations between the US and Turkey worsened after Ankara launched a cross-border offensive against the Kurdish People's Protection Units (YPG) militia on October 9.

Despite an initial green light from Trump, the US president under pressure from a united Congress sanctioned Turkey and agreed a deal with Ankara on October 17 to end its operation in exchange for the YPG's withdrawal from a 120-kilometre (75-mile) zone.

Following a visit by US Vice President Mike Pence, Turkey agreed to suspend the offensive for five days while YPG fighters withdrew.

The operation then ended with a 120-kilometre long area between Tal Abyad and Ras al-Ain under the control of Turkey and its Syrian proxies.

Erdogan also said during the TRT interview that Turkey would have "observation" zones in the border town of Kobane and the city of Manbij in northern Syria.

The Syrian regime deployed recently in Kobane and Manbij after the Kurdish fighters sought help from Damascus during Turkey's military operation.