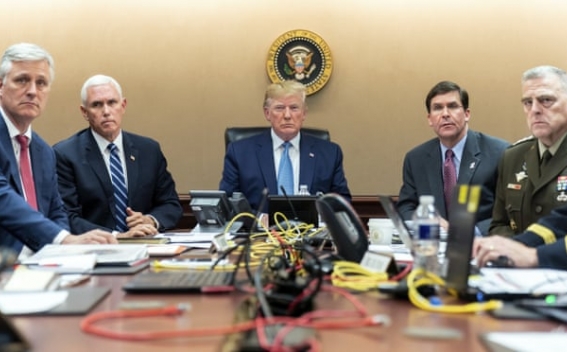 The Islamic State leader Abu Bakr al-Baghdadi has been killed in a raid by US special forces on his Syrian safehouse, Donald Trump announced on Sunday, ending a years-long manhunt for one of the world’s most wanted terrorists, ''The Guardian'' reports.

Trump said the "impeccable" two-hour operation was conducted on Saturday night in the province of Idlib, one of the last areas of the country still outside Syrian regime control, and that US officials had confirmed Baghdadi, 48, was among those killed.

"US special operations forces executed a dangerous and daring nighttime raid in north-west Syria and accomplished their mission in grand style," Trump said.

The Isis leader died "running into a dead-end tunnel, whimpering and crying and screaming all the way," he said.

Baghdadi detonated a suicide vest and killed himself and three of his children, Trump said. "He died like a dog, he died like a coward. The world is now a much safer place."

Trump said US forces were engaged with "massive firepower" as they arrived at the building where Baghdadi was sheltering with his family and associates.

"The compound had to be cleared at this time with people either surrendering or being shot and killed," he said. "Eleven young children were moved out of the house and are uninjured.

"The only ones remaining were Baghdadi in the tunnel and he had dragged three of his young children with him. They were led to a certain death. He reached the end of the tunnel as our dogs chased him down.

"[Baghdadi] ignited his vest, killing himself and the three children," Trump said. "Test results gave certain immediate and totally positive identification, it was him."

He thanked the governments of Russia, Iraq, Syria and Turkey as well as the Syrian Kurdish forces for their assistance. The US special forces reached the compound aboard eight helicopters that flew through Russian-controlled airspace with Moscow’s permission, he said, while the Kurds provided some intelligence.