Garegin Nzhdeh - National Hero but not a Fascist 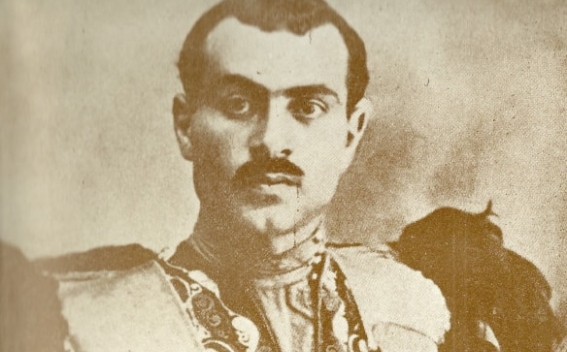 Speculations around Garegin Nzhdeh's name have become very relevant recently. Distorted ideas are voiced on various platforms in Russia and Azerbaijan which have nothing to do with reality. For that reason, we find it necessary to remind our readers once again who was Armenian National Hero Garegin Nzhdeh.

Though it is impossible to paint a full portrait of a figure of this magnitude in this brief article, we will try to present to the reader some of the most important and interesting details from Nzhdeh’s biography and shed light on the work of this talented statesman, diplomat, writer, military commander.

Nzhdeh appeared in the pages of Armenian history in 1912, at the beginning of the First Balkan war. Together with General Andranik Ozanian, he formed an Armenian battalion within Macedonian-Adrianopolitan Volunteer Corps of the Bulgarian Army to fight against the Ottoman Empire in the Balkan wars, for the liberation of Thrace and Macedonia.

For participation in a series of battles, including the destruction of Yaver Pasha's corpus he had received Bulgarian and Greek medals, and the Title of Hero of the Balkans People." During World War I he was the vice-commander of the 2nd Armenian voluntary squad within the Russian army. He was awarded Order of St Vladimir and another Order of St Anna, and was a knight of two Eagles of Georgia.

Prior to World War I, after an amnesty granted by the Russian authorities in 1914, Nzhdeh returned to the Caucasus to prepare the formation of the Armenian volunteer units within the Russian army to fight against the Ottoman Empire. During the first stage of the war, in 1915, he was appointed as an assistant-commander to Drastamat Kanayan (Armenian military commander and politician, a member of the Armenian Revolutionary Federation) of the 2nd Armenian unit. Later on, in 1916, he commanded the special Armenian-Yezidi military unit. In 1917 Nzhdeh with a small battalion helped Koghb (village in the Tavush Province of Armenia), rescuing the local Armenians from massacre.

After the Russian Revolution and the withdrawal of the Russian army, in 1918 Nzhdeh fought in the skirmishes of Alajay (near Ani (today it is located on the territory of Turkey), allowing a secure passage for the retreated Armenian volunteer forces into Alexandrapol.

After clashing with Turkish forces in Alexandropol, today known as Gyumri, the Armenian fighters led by Nzhdeh dug-in and built fortifications in Karakilisa. Nzhdeh played a key role in organizing the troops for the defense of Karakilisa (now Vanadzor, Lori region, Armenia) in May 1918. He managed to mobilize a population of despairing and hopeless locals and refugees for the coming fight through his inspiring speech in the Dilijan church yard, where he called the Armenians to a sacred battle: "Straight to the frontline, our salvation is there."

With the three-day heroic battle of Karakilisa, the Armenians affirmed their will to survive, and Nzhdeh's role in strengthening that collective will is undeniable. Nzhdeh was awarded the highest order of courage for the battles in Karakilisa  (during which he was wounded).

It should be noted that Nzhdeh's role in Zangezur's self-defense battles in 1919 is also undeniable. At that time Zangezur was part of the Republic of Armenia. The Turkish-Azerbaijani Pan-Turkism program aimed at the unification of two "brother states" (Turkey and Azerbaijan). And Zangezur, Syunik was the main obstacle on the way to this unification.

''The enemy intended to throw a bridge over the corpse of a large part of our people between Tajikistan and Azerbaijan, aiming to gain control over the Syunik world and fortifications of Goghtan, thus keeping our young republic in constant terror''.

The participants of the Syunik self-defense battles fought for one common idea so that Syunik would never and never be handed over to Azerbaijan. Garegin Nzhdeh was a commander who could not be deceived under any circumstances.

Nzhdeh knew that they should defend Syunik through heroic battles, otherwise it would have the fate of Karabakh and Nakhijevan. And thanks to Nzhdeh self-defense heroic battles Syunik remained a part of Armenia. And if Nzhdeh didn't succeed to protect Syunik, not only the history of our region, but also the world history would have gone in a different way, our civilization would have a different development.

Fighting against the Turkish, Tatar and Soviet Red Army troops until 1921, Nzhdeh left Zangezur only after receiving a guarantee from the authorities that Syunik would remain within Armenia. After leaving Syunik, Nzhdeh spent four months in the Persian city of Tabriz. Soon after, he moved to Sofia, Bulgaria.

As for his cooperation with the Nazis against the Soviet Union, let's note that no substantiated document was found except for the verbally propaganda.

It is undeniable that Nzhdeh had been keeping in touch with the leaders of Nazis. And here's why. As azg.am reports, after the outburst of World War II, papers in which the Nazis called for the annihilation of the Armenians for being a Semitic people, started being published by the urge of the Turk Panturkists. Persecutions were organized against the Armenian communities in Romania, Hungary and Bulgaria. Nzhdeh revealed the plans of the Panturkists and could convince the Germans that the Turks would only be a burden for them, and he could convince the Caucasian nationalists that they were under threat by the Turks and the Panturkists. He was able to create a unique anti-Panturkist bloc in the Caucasus – a union of the outcast from the Caucasus to counter the anti-Armenian sentiment.

In 1944 when the Soviet Army had already entered Bulgaria he refused to leave the country, remained in Sofia and offered the Soviet Authorities his help in fighting against "Feudal Turkey". But at the end of October, in 1944 the "SMERSH" arrested Nzhdeh and took him to Moscow. He was kept in Vladimir prison.

In 1948 he was sentenced to 25 years of imprisonment and was kept there until 1952. Due to the serious illness he got there, Nzhdeh died in that prison in 1955.

Garegin Nzhdeh has never acted against Russia. Nzhdeh found that the main enemy of the Armenians was Turkey, and he defended his point till the end of his days.

''My whole life has been a struggle against the feudal Turkey, which had destroyed half of my nation. My struggle is not against the Turkish people, but against that state.''