The Hill: Armenian Church of Iran Included in Trump's List which He Threatened to Target 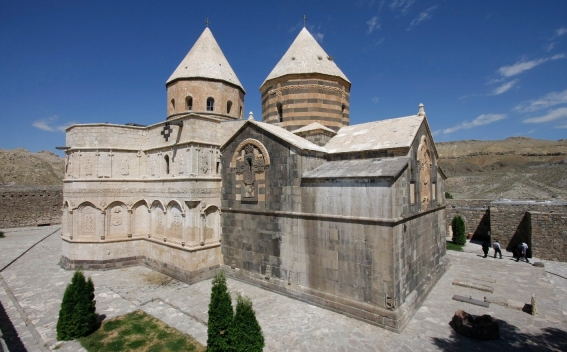 US President Donald Trump had earlier doubled down on threats to strike Iranian cultural sites if the country retaliated over the U.S. airstrike that killed Maj. Gen. Qassem Soleimani.

As ''The Hill'' reported, although Trump administration officials had said the U.S. would act lawfully, the president had repeated threats to take out sites important to Iran and Iranian culture.

In Iran, there are currently 24 UNESCO World Heritage Sites deemed to have cultural, historical, religious or scientific significance. Here’s a look at five key cultural UNESCO sites in Iran.

The Armenian Monastic Ensembles of Iran reside in the northwest part of the country. The ensemble of three Armenian churches were established between the 7th and 14th centuries. The monasteries have survived some 2,000 years of destruction, both from humans and natural disasters. According to UNESCO, they are the only important vestiges of Armenian culture in the region. The buildings are places of pilgrimage for the Armenian Church.

The public urban square in the center of Esfahan was built by Shah Abbas I the Great in the 17th century. UNESCO calls it one of the largest city squares in the world and an outstanding example of Iranian and Islamic architecture, especially its mosques.

Located in southwestern Iran, Persepolis was founded by Darius I in 518 B.C. and was the capital of the Achaemenid Empire. It was also conquered by Alexander the Great in 330 B.C. According to UNESCO, the royal city of Persepolis ranks among the archaeological sites which have no equivalent and “which bear unique witness to a most ancient civilization.”

Pasargadae was the first capital of the Achaemenid Empire and was founded by Cyrus II the Great in the 6th century BC. UNESCO says its palaces, gardens and the mausoleum of Cyrus are outstanding examples of the first phase of royal Achaemenid art and architecture and exceptional testimonies of Persian civilization.

Tabriz Historic Bazaar Complex is considered one of the most important commercial centers on the Silk Road. It consists of a series of interconnected, covered, brick structures, buildings and enclosed spaces for different purposes. Tabriz and its Bazaar were prosperous in the 13th century. UNESCO calls it the most complete examples of the traditional commercial and cultural system of Iran.