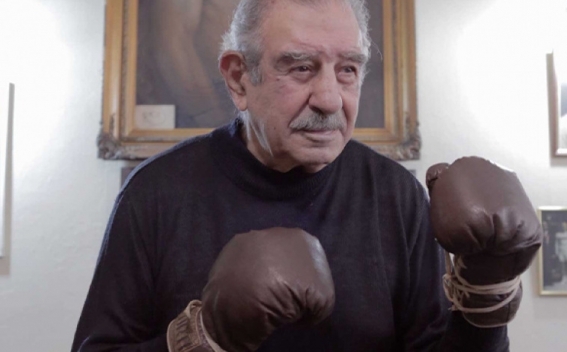 Garbis Zakaryan, known by the nickname "Iron Fist" was born in 1930 in the Armenian district of Sisli in Istanbul. He studied at the local Armenian Esayan school. His father couldn't work because of poor health and his mother would make the entire household living from knitting.He left school at 5th grade and began working as a newspaper salesman to help his family. He became interested in boxing at an early age. But his parents were against his intention to become a boxer. However, despite his parents' objections, Karpis began attending the  Galatasaray sports club in 1944, at the age of 14.

The trainers began to notice his talent during the first few weeks. He became the Istanbul and Turkey champion at 48 kg in 1947 and 1948.

He became a Turkish and European welterweight boxing champion, after representing the Turkish National Team for the first time in 1949 against Spain. After this victory Zakaryan was offered an opportunity to appear in the professional arena. Shortly thereafter, the athlete agreed thus becoming the first Turkish professional boxer in 1951.

He fought 201 amateur and 50 professional matches. He had 226 wins. He was only knocked out 2 times. He reached the pinnacle of his career in 1964, when he was recognized as the strongest boxer in the entire Middle East.

Zakaryan retired in 1966 but continued training European champions.  A number of films have been shot in Turkey about the legendary boxer. Furthermore, Turkish-Armenian writer Aram Kuran and Turkish writer Erden Aktogu has published a book about Zakaryan’s  life, with the support of the Three Altar Church Foundation in Istanbul.

In 2017, the book "Where Are You, Garo" was also published, in which the author, Turkish writer Emina Temel, tells about the love of Garbis and his wife, who was of Italian origin.

Zakaryan died on 26 January 2020 at the age of 90 in Istanbul, Turkey. He was interred at Sisli Armenian Cemetery after the religious funeral ceremony at Surp Yerrortutyun Armenian Church.