Tusk: EU would be Enthusiastic if Scotland Applied to Rejoin 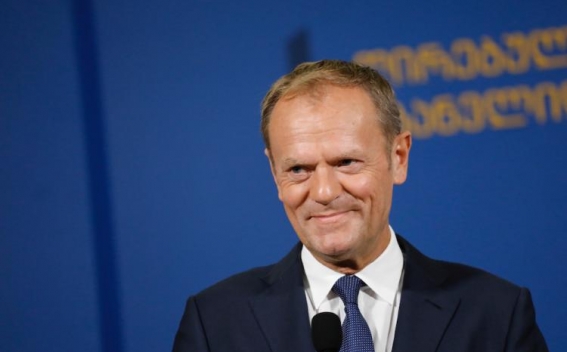 Donald Tusk, the former president of the European council, has said there would be widespread enthusiasm in the EU if Scotland applied to rejoin after independence, The Guardian reports.

In remarks that will boost Nicola Sturgeon’s campaign for a second referendum, Tusk told the BBC he had great sympathy with the desire of many Scots to rejoin the EU after Brexit.

“I want to stop myself from saying something too blunt. Sometimes I feel I am Scots. I’m very Scottish now, especially after Brexit,” he told BBC One’s The Andrew Marr Show.

“Emotionally, I have no doubt everyone would be enthusiastic here, in Brussels and more widely in Europe, but still we have treaties and formalities. But if you ask me about our emotions, there’s a genuine feeling. You will witness only, I think, empathy.”

Scotland voted 62% in favour of remaining in the EU in the 2016 Brexit referendum, and in every election since has shown more than 70% support to parties that backed a second EU referendum or scrapping Brexit.

After a YouGov poll put backing for independence at 51% (excluding those who said they didn’t know) last week, Sturgeon is hoping to boost support for a fresh vote with a series of policy papers this summer setting out the case for independence.

The public sector union Unison added to that sense of momentum when its Scottish council voted on Saturday to back calls for a second referendum. Even so, the YouGov poll found most Scots oppose a fresh vote for the next two years, even if the Scottish National party wins a majority of seats in next year’s Holyrood election.

Tusk said there were significant legal issues facing Scotland were it to become independent and seek readmission to the EU, as well as the diplomatic convention of not interfering in a state’s internal affairs.

The EU has been clear Scotland would need to apply afresh, alongside other applicants.

While he sympathised with Scotland’s plight, Tusk added: “At the same time, I have to respect … I know how important the word “sovereignty”, “integrity”, was in the debate in the United Kingdom. I think it’s not my role to intervene in [that] despite my sympathy. If you ask me about legal circumstances, we have to be here very cautious. We have our own treaties.

“Of course, you can always interpret treaties in very different ways. But if I understand well, the only justified interpretation is that if something like, you know, the independence of Scotland happens then we need a regular new process. There is no automaticity [sic]. New situation, new country. Then it means a new process.”

Sturgeon’s government plans to legislate where it can to make Scotland’s domestic policies stick as closely as possible to EUs regulations, to help its case for fast-tracked readmission.

That opens up a further area of conflict between Sturgeon and Boris Johnson’s government.

The prime minister is expected to reject Brussel’s demands for close alignment on key areas of policy such as workers’ rights, state aid and the environment in the UK-EU trade talks, including UK-wide policies controlled by Westminster.

Johnson’s success in securing the UK’s departure from the EU on Friday raises other significant challenges for Sturgeon over which currency an independent Scotland would use, its significant deficit and the difficulties of having a hard border with the rest of the UK, affecting 60% of Scotland’s trade.

Scotland would not be able to win back any of the concessions the UK had within the EU, such as less onerous VAT rules or exemption from the Schengen security treaty. Scotland would also be expected to rejoin the common fisheries policy – a system which boosted the pro-Brexit vote in Scottish fishing areas.

Scottish government data, which was released last week but not publicised, showed a £5bn cut in Scotland’s economic output from £180bn to £175bn, which is equivalent to a deficit of 7.2%. The deficit shows the gap between public spending and tax income. The EU requires its member states to have a deficit below 3%.

Alyn Smith, the SNP MP and former MEP who championed Scotland’s case in Brussels, said Tusk’s remarks proved “Scotland would be welcomed back into the EU with open arms as an independent country. What senior Europeans are saying in public is what they have been saying in private for some time.”