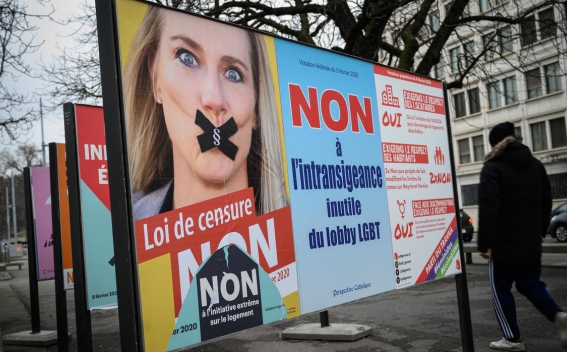 Swiss voters approved by a wide margin a measure that will make it illegal to discriminate against people because of their sexual orientation, Euronews reports.

In late 2018 Switzerland's parliament approved expanding the country's existing anti-discrimination law to make it illegal to publicly denigrate, discriminate or stir up hatred based on a person's sexual orientation.

Opponents of the move insisted it violated people's right to freedom of opinion and gathered enough signatures to force a referendum on the issue. Switzerland holds referendums several times a year that give voters a direct say in policy-making.

Voters supported outlawing anti-gay discrimination by a margin of 63.1% to 36.9%, an outcome roughly in line with pre-referendum expectations. Of Switzerland's 26 cantons (states), only three -Appenzell-Innerrhoden, Schwyz and Uri - had majorities vote against it.

Under the measure, operators of restaurants, cinemas and public facilities such as swimming pools will not be able to turn people away because of their sexual orientation.

The revision approved Sunday expands the scope of a law in force since 1995 that bans discrimination on the basis of race or religion. The law allows fines and up to three years in prison for violations. In its new form, it will cover sexual orientation but not gender identity.

Supporters said the addition is needed but that it would not stifle legitimate public debate as long as the views expressed don't stray into fomenting hate or discrimination.

Voters "are saying unmistakably that hatred and discrimination have no place in our free Switzerland," Justice Minister Karin Keller-Sutter said.

The Coca-Cola Company in Switzerland has publicly shared its support for the initiative to make the anti-gay hate speech illegal.

But critics of the law argued that protections against denigration were already enshrined in Swiss law. The nationalist Swiss People's Party, the biggest single party in parliament, opposed the change as they believe the new legislation could further censor free speech.

They said the backers must now show it was "not a pretext for handing down politically motivated verdicts and silencing unwelcome opinions and voices."

Keller-Sutter said "freedom of expression remains guaranteed.'' She added that courts have been "restrained" in their application of the existing law and "anyone who remains respectful needs to have no fear of being convicted."

Silvan Amberg, Co-President of the LGBTI committee, Sonderrecht NEIN ("No to Special Rights!"), told Euronews that the vote is more "symbolic" for Swiss voters.

"There is not really an objective criteria to decide what is hate speech and what isn't in a broad sense," he said. "We don't want this kind of special law that protects us from hate speech."

"I think we need to focus on the government pushing the dialogue to reach social equality."

Early indications show that Switzerland will pass the referendum with a slim majority.