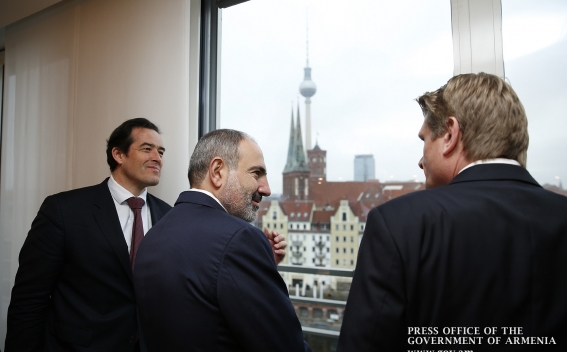 Thankful for the meeting, Mr. Bareiß said the German side is eager to develop and expand trade-economic ties with Armenia. He voiced confidence that the Prime Minister’s visit may help enhance business relations and implement new joint projects in different branches of the economy.

The Prime Minister of Armenia talked about the recent developments in Armenia’s economy and the government’s efforts to improve the business environment in the country. Nikol Pashinyan dwelt on the ongoing programs and the government’s priorities in industry, tourism, agriculture and IT. He underscored that his government is keen to develop economic partnerships with Germany and attract German capital into Armenia’s economy.

The interlocutors discussed ways of implementing such joint projects as might boost bilateral commercial ties. They highlighted the importance of business forums in terms of strengthening ties and cooperation between the business communities.