Dubai Crown Prince Has Posted a Video which Shows a Pilot Flying an Iron Man-Like Jet Pack '5,000ft above the Ground at 150mph' 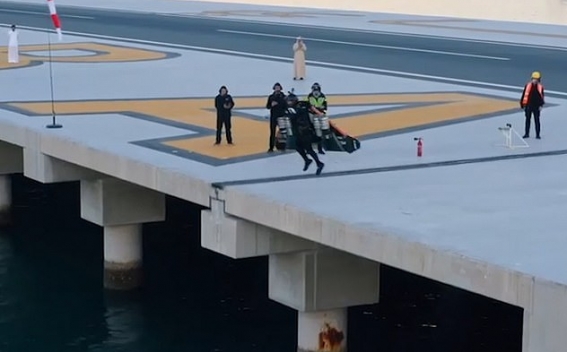 Like something out of a Hollywood blockbuster, French skydiver Vince Reffet is seen strapped to the device which takes off from a launchpad.

After a brief period to stabilise over the water, he rapidly flies off and reaches a top speed of 150 miles per hour before pulling his parachute at an altitude of 4,900ft.

In just eight seconds after taking off, he's already reached 100 metres in height.

After half a minute, Reffet had reached 1,000 metres, travelling at an average speed of 150 miles per hour (around 130 knots).

The unconventional jet pack is controlled from the ground and capable of hovering, changing direction and performing loops.

The 'Jet Wing' jetpack is the project of Jetman Dubai, which aims to 'create a future for individuals flying with jet wings' and 'change the way we experience the world'.

The company aims to achieve 100 per cent autonomous human flight by 2020.