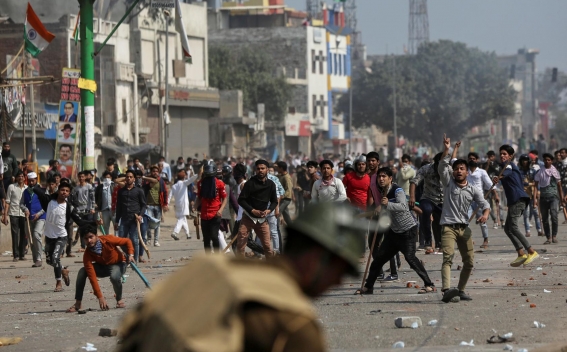 India's capital has seen a third day of violence as the death toll from Monday's clashes went up to at least seven, including a policeman, police told Al Jazeera.

Some 90 people have been injured in clashes in the northeast of Delhi over a new citizenship law, a senior hospital official told Reuters on Tuesday.

"Some of the people brought in had gunshot wounds," Dr Rajesh Kalra, additional medical superintendent at the Guru Teg Bahadur Hospital, said of Monday's violence.

Chief minister of Delhi, Arvind Kejriwal, appealed to residents to maintain peace after an urgent meeting of his newly elected legislators in the capital.

Kejriwal told ANI news agency that his party's legislators from the affected areas said there was a "severe shortage" of police officers.

The violence started a day after the ruling Bharatiya Janata Party (BJP) leader Kapil Mishra warned anti-CAA protesters to end their peaceful sit-ins in the northeastern Jafrabad and Maujpur areas of the Indian capital.

On Monday, police used tear gas and smoke grenades but struggled to disperse the stone-throwing crowds.

A tyre market was set on fire later on Monday, the Press Trust of India said. A video posted on social media showed crowds of men shouting "Jai Shree Ram" or "Hail Lord Ram", a revered Hindu deity, as they went on a rampage, according to the AFP.

Several vehicles and a fire truck were torched in Jafrabad and Maujpur as police imposed prohibitory orders to prevent further violence.

"Hundreds of women have been peacefully protesting against the CAA since Saturday night near the Jafrabad Metro station. But on Sunday, after Mishra led the rally, his supporters pelted us with stones leading to clashes," Zohran, a Jafrabad resident, told Al Jazeera.

"The BJP leaders are trying to give the protests a Hindu-Muslim colour. They incite people in the name of religion, which is very unfortunate."