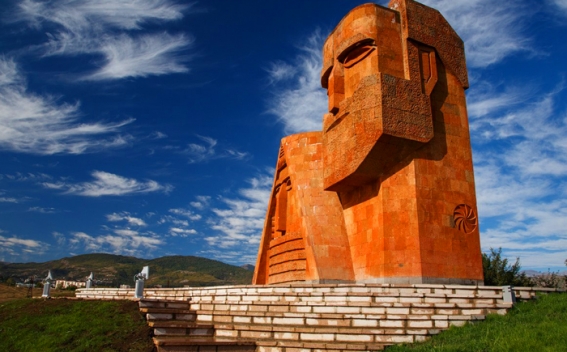 ''We and Our Mountains'' monument or as the locals say ''Grandmother and Grandfather'' is the symbol of Stepanakert (capital city of Artsakh), as well as the whole Artsakh. It is located at the entrance to the city on the high hill. The sculpture, completed in 1967 by Sargis Baghdasaryan, is widely regarded as a symbol of the Armenian heritage of Artsakh. The monument is made from volcanic tufa and presentes Karabakh spouses in traditional Armenian taraz, with a shoulder-to-shoulder stanging proudly with sharp looks.

It symbolizes the blood relationship between the Karabakh land and the people, as well as the irresistible will of the Karabakh people for the preservation of life and family values.

The monument does not have a pedestal. It is as if the mountain hill has been cracked, and they have risen from it and are standing in the native land with their feet firmly on it.

According to Mamikon Farsyan, one of the famous architects of Artsakh, the monument was erected in very difficult conditions. The reason was - the government of Soviet Azerbaijan was against the construction and erection of the monument. Nevertheless, due to the unbreakable will of the people of Artsakh it was erected in Stepanakert  and became the visiting card of the city.

The monument is the first monument in the world built in honor of the longest-living people. Otherwise, this monument is also called the Longlife Memorial.