Feast of Ascension of Our Lord Jesus Christ 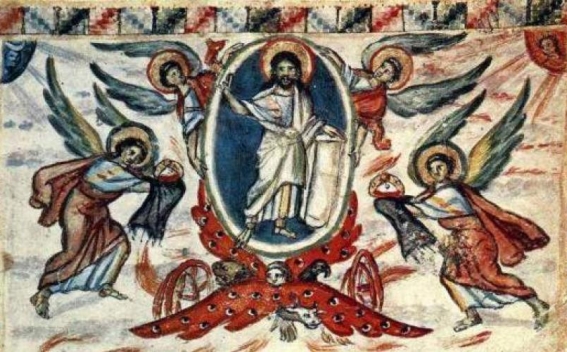 Following His Resurrection and defeat of death, Christ remained on earth for forty days, and continued to appear to His disciples. On the fortieth day, Christ is seen by His disciples for the last time. He blesses them and leaves them with instructions, after which He ascends into heaven.

Two of the Gospel writers, St. Mark and St. Luke, testify about Christ’s ascension. There is also an account of it in the Acts of the Apostles.

Following a final meeting of Christ with the eleven remaining apostles, St. Mark writes, “So then, after the Lord had spoken unto them, he was received up into heaven, and sat on the right hand of God.” (Mark 16:19)

St. Luke gives a little greater detail as he writes, “And he led them out as far as to Bethany, and he lifted up his hands, and blessed them. And it came to pass, while he blessed them, he was parted from them, and carried up into heaven. And they worshipped him, and returned to Jerusalem with great joy, and were continually in the temple, praising and blessing God. Amen.” (Luke 24: 50-53)

But by far the most beautiful account of the Ascension can be found in the Book of Acts:  “And when he had spoken these things, while they beheld, he was taken up; and a cloud received him out of their sight. And while they looked steadfastly toward heaven as he went up, behold, two men stood by them in white apparel; which also said, Ye men of Galilee, why stand ye gazing up into heaven? This same Jesus, which is taken up from you into heaven, shall so come in like manner as ye have seen him go into heaven.” (Acts 1:9-11)

The hymn that is sung in the Armenian Church on Ascension Day mentions the miraculous event of Christ’s Ascension into heaven and the descent of the Holy Spirit on the Apostles.

In the Armenian Church, the day of Jesus Christ’s Ascension is also commemorated for another reason as well. On this date in 1441, the See of the Catholicosate of All Armenians was returned to its historical origins. Following a resolution of the National Assembly gathered in Vagharshapad, the Patriarchal See was relocated from the city of Sis in Western Armenia to the Mother See of Holy Etchmiadzin. Following his vision of Christ striking the ground with a golden hammer, St. Gregory the Illuminator had founded the Cathedral of Holy Etchmiadzin in 303.  However, less than 200 years later, in 484, the Patriarchal See was forced to relocate, and for the next 1000 years, settled in various cities throughout Armenia.  The decision to return the throne of the Catholicos to the Mother See of Holy Etchmiadzin was the fulfillment of a national dream for the Armenian people.