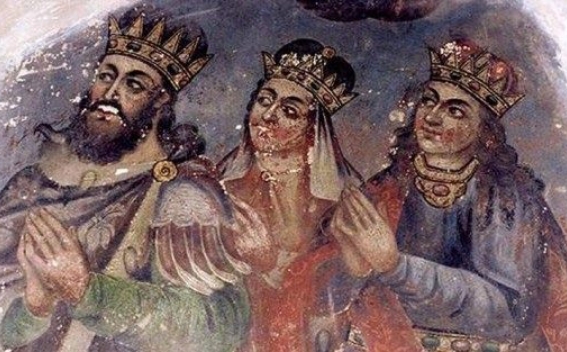 In 287 A.D. Tiridates (Trdat), from the royal house of Arshakouni, assumes the throne which once belonged to his father and becomes Tiridates III, King of Armenia. His name is inextricably linked with the Patron Saint of the Armenian Church, St. Gregory the Illuminator.  In 301 A.D. the king releases the Christian Gregory from imprisonment and proclaims Christianity to be the State Religion of Armenia.  In doing so, the king becomes the greatest advocate of spreading Christianity throughout the country.

The names of Queen Ashkhen and the King’s sister, Khosrovidoukht are closely related to the Great Conversion of Armenia as well.  Princess Khosrovidoukht’s vision of a cure for the King’s incurable illness causes St. Gregory the Illuminator to be liberated from the dungeon of the deep pit.  Gregory then is free to begin the process of spreading the light of Christianity, which is the Gospel of Jesus Christ.

According to Greek historian Agathangelos, the King, the Queen and the Princess meet St. Gregory upon his return from Caesarea, to where he had traveled to receive episcopal ordination.  Following a period of fasting and preparation, Gregory baptizes the three of them.  They are followed by the baptism of the royal court and the nobles of Armenia.  Through the baptism by Gregory, Tiridates becomes the first king in the world to rule over a Christian country.  History also reveals that Tiridates, Ashkhen and Khosrovidoukht personally participate in the construction of the Cathedral of Holy Etchmiadzin.  The stones they used to build the cathedral were brought to Vagharshapat from the slopes of Biblical Mount Ararat, Qahana.am writes.