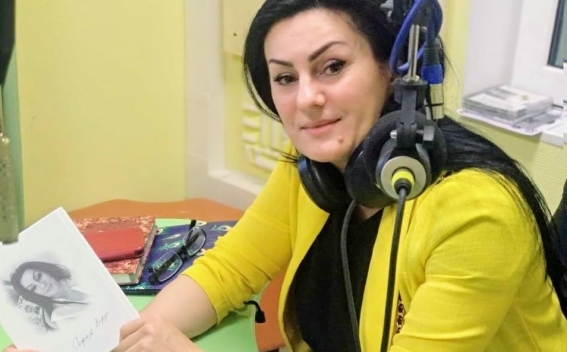 - A cosmetologist by profession, but you also write poems. We know that now you are working on the poem "Tears of the Mountains of Armenia". How and when did you get the idea to write it?

- I always had the idea to write a poem about the massacres of Armenians, because my parents and grandmother always told how the Turks treated them cruelly and how they humiliated the Armenians.

- Are you from a family of survivors of the Armenian Genocide?

- Yes, my maternal great-grandmother, Dongarova Zarvard, told how she ran away from the Turks with her five-year-old son in her arms. When the Turk caught her, he said that he would now slaughter her son like a lamb. Then my grandmother crawled to his feet and on her knees began to beg him to let her son go. Miraculously, they survived. The fact is that when the Turk raised his sword, he sneezed. Then he sharply turned around, stuck his sword into the tree and said: "Run, miserable woman, run and say thanks not to your God, but to my Allah"...

I describe this story in a poetic form in my poem "Tears of the Mountains of Armenia". Every time I was told this story, I was trembling with indignation! After these terrible stories, I passed this pain through myself. That's when I got the idea to create something powerful, strong, so that people's hair would stand on end. The idea, of course, arose a long time ago, but, apparently, the time to write has come now. This is a small tribute to my ancestors. Each chapter of my poem is one real life story.

I would like to make a small contribution to the recognition of the Armenian Genocide. Because until there is no recognition, they will always kill us, slaughter us, rape us. And this will continue until they destroy our traditions, our language and finally our world! Everything can happen again if we do not prevent it. My mission is this - to gather all the Armenians in the world and demand the recognition of the Genocide.

- That is a very interesting story. The book of our family has been preserved, which tells that in the second half of the 8th century the Persians captured and took to Persia a large group of Armenian craftsmen. Among them were my ancestors. In Persia, they were settled in groups in large cities and over the centuries they built fortresses, palaces, houses, bridges, public buildings. They lived in the position of artisans, not slaves, but they did not have the right to return to their homeland, and the language of the Persians (Farsi) eventually became their own. They founded schools, apparently parish schools, and taught their children the Armenian language and literacy.

In the 9th century, at the invitation of the Persian Shah, Maharaja of Madras came to Persia from India. He was impressed by the firm and beautifully built palaces, fortresses, houses, bridges and roads. Inquiring about who built these structures, he learned that this was the work of captured Armenians.

Maharaja turned to the Shah with a request to give him several Armenian masters with their families. In the state of Madras, they were accepted as free artisans and were engaged in the construction business. In the 12th century, the city-state of Madras, as a result of wars and epidemics, fell into decay and became impoverished. The Armenian community came to the conclusion that the time had come to appeal to the authorities to let them to return to their homeland. And they arrived in Shemakha - a city in Eastern Armenia.

My ancestors returned to Armenia, they named their village Madrasa in honour of the last city in which they lived. They built houses for themselves and took up viticulture and winemaking. Their products have always been in demand.

- Who is Grigor Narekatsi for you - the great Armenian poet, philosopher and theologian of the 10th century?

- I am very happy about this question, because Narekatsi is something extraordinary for me! This is an amazing person, a person of exceptional strength and spirit. Narekatsi's poetry is incredible, imbued with images, themes and realities of sacred history. Reading it, you understand what life is (in every sense of the word), how imperfect a person is and how sinful he is.

When I read his Book of Lamentations, some amazing things began to happen to me, as if I began to perceive the world in a different way. For some time I did not understand what was going on around me, inside me. It was as if I was reviving, other values ​​of life appeared for me, I began to look at the world differently. In general, Grigor Narekatsi inspires me and leads me along the Path...

- Recently your poem "Peacock's Feather" was published. What is it about, what was the reaction in Russia?

- Yes, indeed, my book "Peacock's Feather" was recently published. It was well received in Russia - my readers like it, the reviews are positive. I have been writing this poem for about 7 years. We can say that I slept and woke up with thoughts about my heroes, I did not know - would they part or stay together? But at the end of the poem, I nevertheless reunited my heroes - it would be cruel to separate them when they love each other so much and infinitely.

- So the "Peacock's Feather" is a love story?

- Yes, the poem is about sublime, deep love. I wanted to talk about what love can do to a person. And if there is a reunion, then it is ordained by God. This is called - one fate for two! My heroes, Sofia and Oleg, went through many trials before they met. On their way there were deceit and meanness, betrayal and jealousy, but eventually love won. The poem describes the beginning of the 19th century, in particular, 1812-1813, the years of the war. My hero is a patriot, a hero. I love Russia very much, and I associate it with birch. In his dream Oleg was warned by the birches that something bad was going to happen.

- In the Stavropol region, as in Russia as a whole, there are various Armenian organizations that are aimed first of all, to support the culture of the Armenian population. For example, in Stavropol, on the basis of the Armenian diaspora, a national school has been opened, in which ethno-cultural national education is additional to the basic secondary education. In these schools they teach Armenian language, familiarize children with the spiritual and cultural values, customs and traditions of their people, develop the musical and visual abilities of children on the materials of rhythm melody, artistic traditions, and contribute to the development of national and ethnocultural tolerance.

It has become a tradition in the life of Russian Armenians to celebrate significant dates of national importance for Armenians. We don’t forget the mournful Armenian history either - the tragedy of the 1915 Genocide and the devastating Spitak earthquake of 1988. Therefore, every year on April 24 and December 7, events and memorial evenings are held. It should be noted that the study of the history of Armenian migrations and settlements on the territory of Russia, in particular, on the territory of the North Caucasus, is also relevant for modern Russia, which is a multinational country. Russia has always been interested in attracting the hardworking Armenian population - since the time of the tsarist government, it has created all the conditions for the life of the Armenian people to be worthy.

- I am Inga Seyranova, and Sofia Verdi is my pseudonym. I was baptized under the name Sophia, which in Greek means wisdom. And Verdi is Verdian - my grandmother's maiden name.