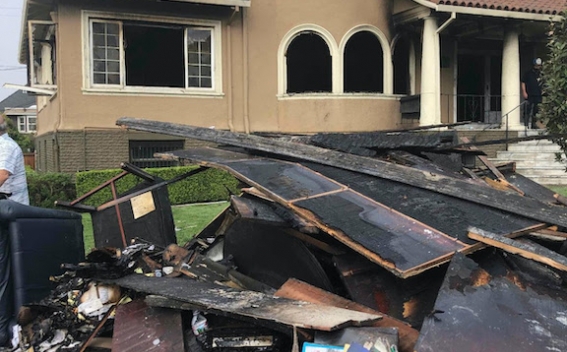 The Board of Trustees of the St. Gregory Armenian Apostolic Church of San Francisco announced on Thursday that around 4 a.m. the building adjacent to the church was set ablaze by arsonists, Asbarez reports.

''The building housed Vasbouragan Hall, as well as offices for St. Gregory Armenian Church and various organizations. The San Francisco Fire Department responded immediately, however, the building has suffered a great loss,'' said the church board of trustees.

''The Church Board of Trustees and community leaders are on site assessing the damage and working closely with San Francisco Fire and Police Departments in their investigation. We will provide more updates to the community as they become available,'' added the board.

Armenian community officials said that the fire was started in three different areas on the building–the church Sunday School classrooms, the church office and the Hamazkayin Library.

This follows an attack on the Krouzian-Zekarian Vasbouragan Armenian School and the adjacent community center in July. The exterior of the building was spray painted with anti-Armenian, pro-Azerbaijani graffiti.

''The ANCA San Francisco-Bay Area condemns the attack on the St. Gregory Armenian Church Center and is deeply concerned about an emerging pattern of hate crimes targeting the Bay Armenian Armenian American community as an extension of Turkish and Azerbaijani Government aggression against Armenia and Nagorno Karabakh,'' said the Armenian National Committee of America San Francisco Bay Area chapter in a statement on Thursday.