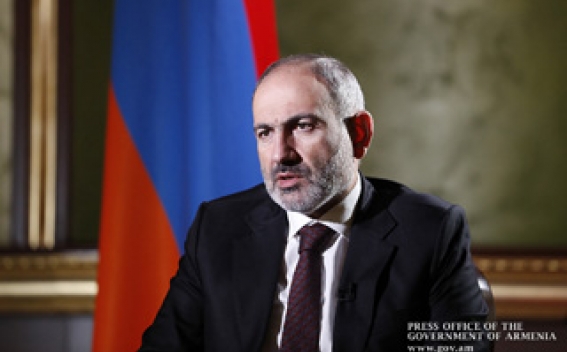 Prime Minister Nikol Pashinyan gave an interview to the Iranian IRNA news agency, which is presented below.

IRNA - The President of Iran, Hassan Rouhani, has stated his readiness to play a constructive role in resolving the dispute between the Republic of Armenia and Azerbaijan. What is your response to this proposal and what practical initiative do you think Iran can mediate?

Nikol Pashinyan - You know that the Minsk Group is the only internationally recognized framework to deal with the Nagorno-Karabakh issue. As an important regional stakeholder, Iran has a key role to play in this respect. I think this role should now be focused on putting an end to hostilities. We will welcome any constructive step by Iran to bring peace and stability to the region.

IRNA - You have repeatedly warned of the presence of foreign forces in the Nagorno-Karabakh conflict. Did you share this concern in the phone talks held with President Rouhani?

Nikol Pashinyan - Yes, it has been proven internationally that terrorist mercenaries have been transported from Syria to the region by Turkey to attend military operations, and this is a serious threat to the region, as a whole.

Unfortunately, the regional countries did not take this fact seriously, but there is no doubt that the presence of foreign terrorists is fraught with grave consequences that we will see in the future. I do believe that all countries in the region should treat the matter more seriously.

IRNA - There are specific fears in Iran that the Nagorno-Karabakh conflict could turn into a full-blown protracted war, with global powers intervening in the region in addition to foreign troops. What are your suggestions and solutions for addressing these concerns and getting the issue back to the table of negotiations?

Nikol Pashinyan - Azerbaijan is making an extensive use of Israeli drones, and this fact proves that foreign powers are intervening in the region in various ways. No foreign intervention is admissible except for the role played by the Minsk Group Co-Chairs. However, so far they have not been able influence the developments in the conflict zone, and we have what we have at this point of time. They have statements and voiced their position, which failed to have a real impact on the developments.

IRNA - You have repeatedly stated that the current escalation had been planned for a long time. Is there any evidence to prove this? What prospects did those preparations outline for the future of the conflict?

Nikol Pashinyan - One and a half months before the flare-up, the Republic of Azerbaijan held a joint military exercise with Turkey, and some Turkish troops remained in Azerbaijan after the exercise was over. In addition, Turkey recruited Syrian terrorists and transported them to Azerbaijan with the aim of getting them involved in the planned hostilities.

If the aggression had not been planned beforehand, there would have been no reason to move troops from Syria to the Republic of Azerbaijan. Today, the presence of terrorists in the conflict zone is an established fact as evidenced by numerous authentic documents published on this topic. All these documents testify that the war was planned in advance. We are in the midst of a pre-planned large-scale war, which is a threat to the entire region.

IRNA - What do you think is preventing the ceasefire in Nagorno-Karabakh, and why did hostilities continue after the Moscow meeting and the agreement reached on Saturday night?

Nikol Pashinyan - It is obvious that Turkey is trying to undermine the ceasefire, as it has set far-reaching goals. Turkey is not only targeting Nagorno-Karabakh, but it also seeks to impose its presence in the South Caucasus. Here, I should underscore that this is part of Turkey’s imperialistic policy, which seeks to expand its influence to the east, north, and southeast of Nagorno-Karabakh, and this directly affects all regional countries. This fact needs serious consideration, and the regional stakeholders should state their position in this respect.

IRNA - As you nay know, mortars from the conflict zone have hit Iran several times and many UAVs have entered the Iranian skies during this time. Iranian officials have repeatedly warned thereof the parties to the conflict. What is your solution to prevent this?

Nikol Pashinyan – I am sorry, if any was the fault of the Armenian side. I do not have accurate information on all such instances, but I assure you that we will make every effort to ensure that no harm is done to friendly Iran and things like that do not happen again. The Armenian side will do its utmost to prevent any recurrence of similar incidents, and I can assure you that we will be more vigilant on this issue.