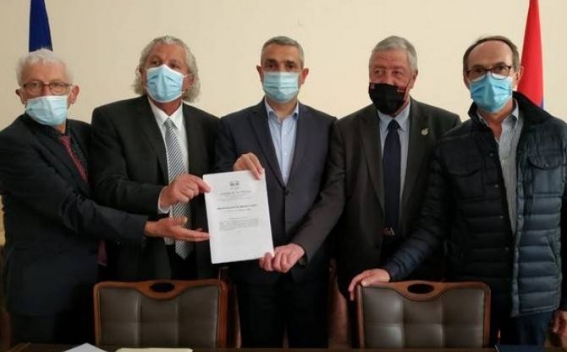 On October 26, Foreign Minister Masis Mayilian met with a delegation of members of the French parliament.

In his speech, Artsakh’s Foreign Minister welcomed members of the French delegation and expressed gratitude for their solidarity with the Republic of Artsakh, which had been subjected to armed aggression by Azerbaijan with direct involvement of Turkey and international terrorists from the Middle East deployed by Turkey to the conflict zone. Masis Mayilian also highly appreciated the efforts of French President Emmanuel Macron aimed at achieving a ceasefire and restoration of peace and stability in the region.

The Foreign Minister stressed that in the past 30 years the armed aggression unleashed on September 27 is the third attempt by the Azerbaijani side to suppress the right of the people of Artsakh to self-determination by force, noting, however, that the current situation differed from the previous ones both in scale and the types of weapons used. According to the Foreign Minister, the armed aggression of Azerbaijan was accompanied by numerous cases of war crimes, documented also by international organizations.

Masis Mayilian noted that as a result of the military aggression about 60 percent of the republic’s population was forced to leave their homes, most of the civilian infrastructure was destroyed causing a difficult humanitarian situation in Artsakh. In this regard, the Foreign Minister stressed the need for the involvement of specialized international humanitarian organizations in addressing the situation.