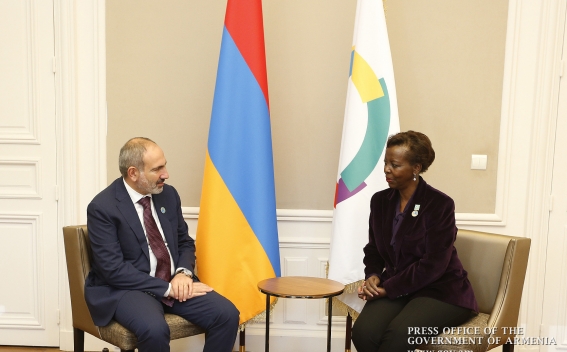 The Premier thanked the Secretary General of the International Organization of La Francophonie for thoughtfulness and support provided during these challenging days for Armenia. He called Ms. Mushikiwabo’s attention to the fact of involvement of thousands of mercenary terrorists by Turkey during the Azerbaijani-Turkish aggression against Artsakh. Nikol Pashinyan noted that their presence in Azerbaijan is posing a serious threat to international and regional security.

Both sides agreed on the need to safeguard those Armenian religious, historical and cultural assets in Artsakh that came under Azerbaijan’s control, and stressed the importance of releasing all captives, hostages, identifying and repatriating the missing persons.

Prime Minister Pashinyan thanked the IOF Secretary General for ensuring the sustainable operations of the International Organization of La Francophonie amid the ongoing pandemic. He regretted that a number of hosting events had been cancelled during Armenia’s presidency.

Ms. Mushikiwabo voiced her support for the Prime Minister of the Republic of Armenia, highlighted Armenia’s role in the International Organization of La Francophonie and assured that she would make every effort to further strengthen cooperation with our country within the framework of the Organization.

Taking the opportunity, she conveyed warm greetings to Prime Minister Nikol Pashinyan on behalf of the President of her native country, Rwanda.