Commemoration of St. Abgar, First Martyr of the Church and our First King Believing in Christ 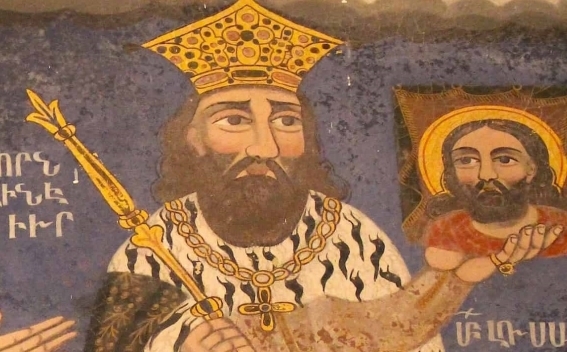 According to the tradition St. Abgar was the first Christian king of the 1st century, the son of the Parthian king Arshakunie Arsham. He was also called “senior man” as he was the wisest of all and of genius. Historian Moses of Khoronk, Assyrian historian Labubnia of Yedessia, Greek historians Procopis and Yeusebius have told about the king Abgar. He built the city of Yedessia in the site where the Armenian army protected the ford of the river Euphrates from the Roman captain Casius. Later the king moved the royal palace and all idols from Nisibis to that city, Qahana.am informs.

It is during the period of reign of the king Abgar that Jesus Christ, the Savior of the world, was born. And Abgar, who was incurable, becoming aware of the wonders worked by Christ, believed in Christ and by means of his delegates sent a letter-petition to Jerusalem, to the Savior, asking Him to come and heal him. In the response letter it was said, that Christ still had important things to do in Jerusalem, but He should send one of His disciples to the king to heal him. After the Ascension of the Savior Apostle St. Thaddeus came to Yedessia, healed the king Abgar, the sick, preached the Gospel and appointed Adde, the silk-weaver, to be his successor. Jesus had sent his portrait to Abgar and it was kept for a long time in Yedessia, and later in the churches of various cities and towns.

After that the king Abgar sent letters to the king Tiberius and the king Nerseh of Assyria exhorting them to admit Jesus Christ as the Son of God and the Savior.
The king Abgar passed away probably in the first half of the 1st century.