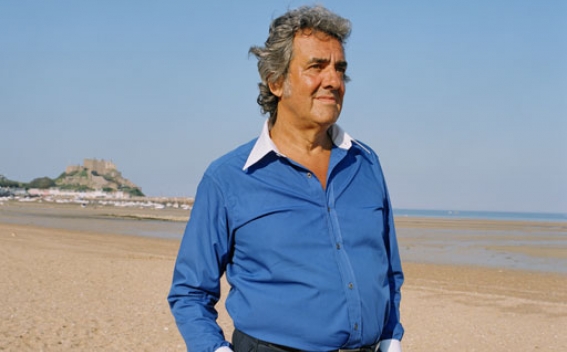 David Dickinson (Gyulasaryan) is a well-known British businessman, English antiques expert, was a BBC television presenter, and is currently one of the most popular TV presenters in ITV.

He was born in 1941  in Cheadle Heath, Stockport, Cheshire. He was brought up in the Jim andJoyce Dickinson family, where he was supposed to have been born. David was adopted by the Dickinsons, a local couple. David only discovered that he was adopted when he was 12, though he says that he always felt different from the other kids. David left school early and went into trading in the textile business - just like his natural grandfather, Hrant Gulessarian - even before he knew his real background. He stumbled across the secret by chance, finding a document about himself.

His biologist Mother Evgenia (Jenny) Gyulasaryan felt she had no choice but to give up David, as her lover was married and her father had strict values that no-one should bring shame on the family. Trapped, she arranged for Joyce to take care of David. She then met and married Bert Moss and moved to Jersey, where they had a son… In his early twenties, David decided to contact his birth Mother, who was then living in Jersey. They communicated by letter for some years but they never met. She had completely reinvented herself on Jersey and had told no-one about his existence.

However, in order to get as much information as possible about his roots David travelled to Istanbul. In the Turkish capital, together with an Armenian historian, they find the house of David’s ancestors, but it was empty. This was due to Armenian Genocide in 1915, when 1.5 million Armenians were killed in Ottoman Empire. Examining their family tree, the British TV presenter realizes that all traces of lost relatives disappear after 1919, BBC reports.

David began an apprenticeship at an aircraft factory when he was 14, but quickly left to work in the cloth trade in central Manchester.  Some time later, David learned that his maternal grandfather, Hrant Gyulasaryan, was also selling textiles; he was so successful that he became a millionaire. “Interestingly, I discovered that my Grandfather was an Armenian silk trader who had moved to Manchester in 1910 and sold suiting material in the very same streets I began trading! Aren't genetics peculiar! It's my Armenian Grandfather to whom I attribute my passion for the flamboyant and for trading”, David said.

At 19, Dickinson served three years of a four-year prison sentence for mail-order fraud. The majority of his sentence was spent at Strangeways in Manchester.[2]

Dickinson set up again in Manchester with the assistance of an old customer as silent partner, and the business ran until 1991 when, in light of forthcoming recession, the shop was closed. Dickinson decided to concentrate on selling antiques at prestigious fairs, taking stands at Olympia and other major antiques fairs three or four times a year, dealing in 18th and 19th century furniture and works of art.

In 1998, a chance meeting with a TV producer at a barbecue led to Dickinson's TV appearance, a two-part documentary for the BBC made about him and his preparation for a show at Olympia.  Between 2000 and 2004, Dickinson hosted the BBC One antiques show Bargain Hunt, where he was succeeded by Tim Wonnacott. Dickinson left the BBC in 2005 and since 2006, Dickinson has been hosting the ITV daytime show Dickinson's Real Deal. The show sees members of the public bringing antiques and collectables to sell to a dealer or take to the auction.

In April 2003, he hosted his own daytime chat show series The David Dickinson Show and in 2017, he presented David Dickinson's Name Your Price for ITV.

Dickinson is married and has two children.