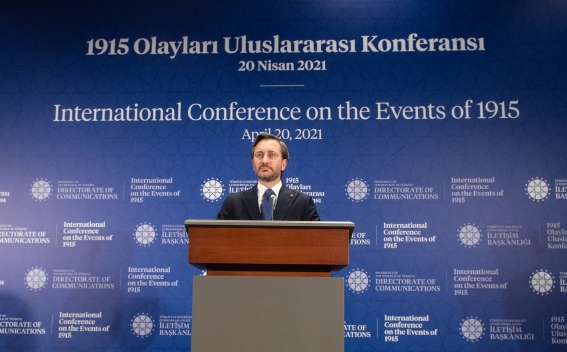 Ahead of April 24, Turkey continues its policy of denial at the state level. In particular, an international conference denying the Armenian Genocide was held in Turkey which was organized by the Presidency of the Republic of Türkiye Directorate of Communications.

As expected, the conference participants again put forward unfounded theses on the Armenian Genocide, once again resorting to the policy of distorting historical facts and international law. They not only put an equality sign between those who committed the Genocide and between victims, moreover they spread a fiction that allegedly Armenians are not victims, but are criminals and that they have not been slaughtered, instead they have slaughtered the Turks.

This conference once again proved that the Turkish authorities are not only going to face their own history but, on the contrary, they continue to insist on their thesis to form a commission of historians, emphasizing that only "revealing the truth" will heal our wounds, contribute to peace and stability in the whole world, especially in the Caucasus. "

It should be noted that these theses of Turkey on denying the Armenian Genocide, accusing Armenians of treason and presenting themselves as victims are not new. When we elaborate further on the policy of the Turkish authorities on the Genocide in different years, it becomes obvious that there have been no significant changes in their statements.

However, it is noteworthy to mention that all this acquires radically different meaning when we view the conference and Turkey's policy of denial in the context of the recent messages of the Turkish authorities towards Armenia.  In particular after the 44-day war, they constantly raise the issue of opening a new page in the relations between Armenia and Turkey at the highest level. These ongoing messages are so positively received by some Armenian circles that they have begun to talk about a change in Turkey's attitude towards Armenia, about reconsidering of the enemy image, and about the establishment of relations with a constructive neighbor.

They even not take into account the fact that Turkey, on the one hand, states that its door is open for Armenia, on the other hand, continues its policy of denial, moreover only a few months ago it supported Azerbaijan, including the issue of terrorists.