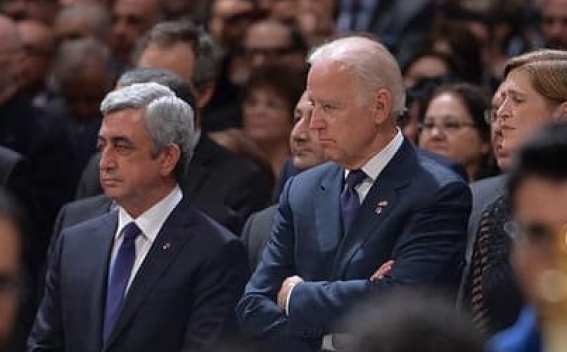 Third President of the Republic of Armenia Serzh Sargsyan sent a letter to President Joe Biden of the United States of America, thanking him for officially recognizing and condemning the Armenian Genocide in his April 24 message. The letter reads:
"Excellency,
I was pleased to take note of your April 24 message. I have kept fond recollections of our meeting in 2015, when in your capacity of U.S. Vice President you were attending an interfaith prayer commemorating the victims of the Armenian Genocide at the National Cathedral in Washington. I was moved to see you with a flower of forget-me-not commemorating the Armenian Genocide.
As fate has willed, six years later, true to your commitment to human rights and your electoral pledge, you recognized the Armenian Genocide as the 46th President of the United States.
You have always decried that historic injustice as you felt the struggling spirit and resolve of U.S-based genocide survivors and their descendants, who have made a tremendous contribution to shaping the full picture of the Armenian Genocide in America’s political elite.
Today, as the Armenian people face new bloody challenges of unpunished denial and xenophobia in another part of their historic homeland - Artsakh, it is extremely important to defend their right to a dignified, peaceful life in their homeland.
Honorable Mr. President,
By recognizing the Armenian Genocide, you not only gave a fair, clear assessment of past realities and undeniable historical facts, living up to the 106-year-old expectations of millions of American-Armenians and 10 million Armenians across the globe, but you also made an important move towards preventing and eliminating that crime.
Please accept, Excellency, the assurances of my highest consideration."
Հայերեն На русском